After sharing my experiences decorating floats with my daughter, I figured it would only make sense to actually show her.  The entire family packed into the car for a quick trip to the float near us in the City of South Pasadena, the oldest self-built float in the parade.

Located behind the War Memorial on Fair Oaks, the group of long-time volunteers and South Pasadena High School students pitched in on their entry into the 2009 Tournament of Roses. Since the entire float is raised up through volunteer efforts, the committee has several ways for locals to donate money.  Last night was their Crunch Time Dinner, a sort of last minute shove to get bills from this year paid off and ramp up for next year’s float.  Another little way to raise money was to give us the opportunity to get our name on the float, so to speak. For $1, we signed a vial that will hold flowers that will be placed on the float.

Walking in, we came upon a group of women who were deveining luminaria.  I spoke to one who has been volunteering for 15 years and another, Wendy Snow, who has volunteered for the last 27 years and is now on the float’s committeee. My daughter, fascinated by the project, quickly jumped in to help them and you can too.  There is still a few more hours to decorate before the float gets towed to Orange Grove Blvd.  If you’re in the area and want to experience the fun or just drop by to make a donation, they’d love to have you.

END_OF_DOCUMENT_TOKEN_TO_BE_REPLACED 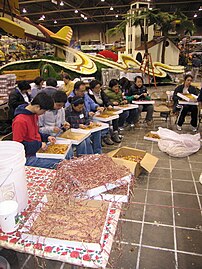 One of my favorite LA volunteer efforts is decorating the floats for the Rose Parade.  It started back in High School, when we received extra credit for doing so over the school break.  The tradition continued in college as my university enters a float into The Tournament of Roses every year. The experience ended after I met my husband who detests everything about parades due to his growing up in Communist-era Romania.

Still, once my kids get a little older, I plan on taking them to decorate floats.  Everyone loves that feeling of watching a project go from the drawing table to the finished product and float decorating provides that to hundreds of people at once.  Walking into the warehouse to see a bare bones structure, looking at the plans and getting assigned an organic matter is simply thrilling.  Once the seeds and dried flowers and leaves are glued on, then comes the hard part of placing the petals.  That is also when the various groups and random volunteers come in.  While making it a little more difficult (there’s so many people!), it also makes it a little easier, provided everyone works as a team and you don’t get that one lady who yells at everyone for the sake of yelling.

There is something about showing up on the parade route at 3am, to put the finishing touches on a float.  One year, our float was nowhere near done by the time it was slowly towed west on the 210 Freeway, to Orange Grove Ave.  We were still gluing orange petals and poppy seeds on our floats when the judges were a float away.

I highly suggest that everyone have this experience at least once.  Watching the parade later and seeing “your” float go down Colorado Blvd. is such a wonderful emotion.  If you’re interested in spending a few hours in these closing days of 2008 decorating floats, please contact the local float makers for details: