Coming in a close second to my deathless obsession with measuring rainfall, is my never-ending crush on the moon, particularly when it hitsa your eye like a bigga pizza pie, such as last night’s full version. So after this morning’s pre-dawn dog walk I situated my 60x spotting scope on the porch (illustrated after the jump), got my point-and-shoot all up in its viewfinder and managed to hold everything steady long enough to land this big fella at 6:31 a.m., juuuust before it got tangled up in the frontyard tree branches and power lines (click to enormify).

END_OF_DOCUMENT_TOKEN_TO_BE_REPLACED

Last night, I was invited by a fellow Metblogger to an ArcLight screening of Moon, the sci-fi indie starring Sam Rockwell and directed by Duncan Jones, son of David Bowie.

Jones was on hand afterward for a Q & A. I’ve been to my share of those over the years and enough have turned out to be snoozers that I found myself antsy at the prospect as the end credits started to roll.  But Jones’ big enthusiasm for his little (budget-wise; it cost $5 million) movie was contageous and the audience responded with a lot of pointed questions– everything from bizzy budget and shooting process questions to “what does your father think of it?” (He approves.)

Jones thanked the ArcLight for its support, having screened it since its release in mid-June– not bad for a low-budget, confidently distinctive sci-fi movie (also chilling and engrossing) that looks back to another era, paying homage to earlier genre classics as it finds an original way to tell a story. As influences he mentioned the films 2001 and Silent Running of course, but for me it also had a whiff of the brilliantly manic novels of the late sci-fi author Philip K. Dick in its intensely mundane presentation of the not-too-distant (and therefore not-too-unimaginable) future.

It looks like ArcLight Hollywood will be showing Moon for another week, according to Jones. This isn’t one to wait to watch on DVD. Go.

(And if you need nudging, consider that on Rotten Tomatoes, Moon has a rating of 91.) 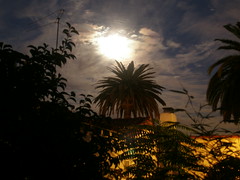