The 3-day 2010 ID Film Fest kicks off tonight in Little Tokyo and it features a weekend of Asian/Asian American films and workshops. Opening with the Los Angeles premiere of the critically acclaimed film Kit Hui’s Fog (starring Terrence Yin and Eugenia Wan), the festival will also feature Hirokazu Koreeda’s much talked about film Air Doll is as the festival’s Centerpiece film. Ian McCrudden’s The Things We Carry will close out the three-day movie feast.

“Los Angeles is a postmodern collage of cultures and identity,” says founder/filmmaker Quentin Lee. “Even within the broader umbrella of the ‘Asian American’ community, there are Japanese, Korean, Chinese, Filipino, Vietnamese, Laotian and Cambodian Americans. Further diversifying the community are the divisions between first generation immigrants and those who were born here. A crisis of identity is inevitable and necessary even though we fantasize a more utopian unity. ID Film Fest is proud to present contemporary works that examine, explore or celebrate the identity crisis in our diverse global Asian community.” This year’s ID Film Fest filmmakers and actors will include: PJ Raval, Jessica Sanders, Brent Anbe, William Lu, Feodor Chin, James Huang, Kerwin Berk, Hirokazu Koreeda, Kit Hui, Ming Lai, Eugenia Wan and Terrence Yin.

Some of this year’s ID Film Fest free programs (for audiences) will be the “The Filmmaker’s Crash Course Session,” providing 7-15 minute crash courses pertaining to the business and artistry of filmmaking. More interesting events include the “Battle of the Pitches 2” where filmmakers will get a chance to participate in a live screenwriting pitch session with industry execs. The finalists for the “API Pilot Shoot Out” will present trailers of their work in competition.

Alongside the public programs, the Asian American Independent Feature Conference (AAIFC) is another component of ID Film Fest. A one-day think tank and networking conference for a select group of 30 filmmakers on the state of creating Asian American independent feature content will take place on Saturday, October 9, 2010.

A program of the Japanese American National Museum, ID Film Fest was founded in 2008 by filmmakers Koji Steven Sakai and Quentin Lee to screen compelling Asian and Asian American works that have not yet had a chance to show in Los Angeles. ID Film Fest will run October 8 through October 10, with all events taking place at the at downtown Los Angeles’ National Center for the Preservation of Democracy located at 111 N. Central Avenue, Los Angeles, CA 90012. For more information on the festival and ticket information, please visit the ID Film Fest 2010 site.

Okay I’ll come clean: this post was promised to feature the incomparable Pig Candy at LOU (on Vine just above Melrose).

Unfortunately my schedule just didn’t permit me to get in there and order any in time to fit the time slot, so I’m giving you another awesome dish that I order like a mental patient: The Tuna Tuna Bowl at TOT in Little Tokyo.

“Tuna and Tuna” refers to the generous number of slices of delicious seared ahi which surround a lovely lump of spicy tuna in the center. All this atop more than enough romaine lettuce, with a neat kind of teryaki mayo dressing. Comes with miso soup and a pre-salad salad.

TOT stands for TEISHOKUYA OF TOKYO. They’re open seven days a week, 11:30am to 11pm. 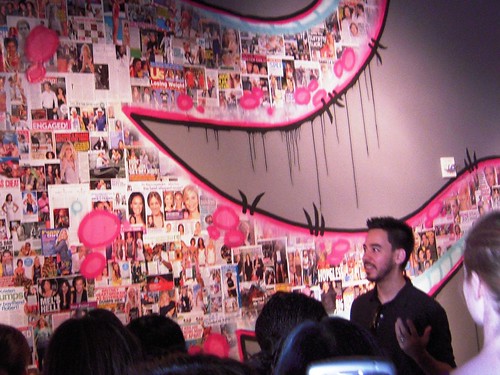 About a month ago, Mike Shinoda of Linkin Park fame opened a exhibit of his artwork called Glorious Excess (Dies) at the Japanese American National Museum in Little Tokyo.

This show, a follow up to his highly-successful 2008 show Glorious Excess (Born), allowed Shinoda to return the Museum this summer to unveil his latest collection of paintings and digital works. Larger, broader, and more sensational than before, Glorious Excess (Dies) is the next (and final) chapter in his series exploring society’s obsession with celebrity culture, consumer addiction, and fascination with excess.

His Glorious Excess works follow a skeletal central figure’s rise to fame in the nine works created for (Born), and the character’s fall in the 17 works produced for (Dies). Not to be missed is the coffin installation; made by the same company that made Michael Jackson’s coffin.

There is a ton of stuff happening in Little Tokyo this weekend, including the ID Film Fest, so check it all out before Glorious Excess (Dies) closes on October 4.

On a side note, 8Asians (another site I contribute to) is doing a giveaway of an autographed copy of the limited edition collectible art book that Shinoda produced for Glorious Excess; the forward was written by Shepard Fairey.

Photo taken by me.

The second annual ID Film Festival, dedicated to contemporary digital films that explore and celebrate identity within the diverse Asian/Pacific Islander community, will present an international and local lineup of films this coming week/end, October 1-3 at the National Center for the Preservation of Democracy in Little Tokyo, Los Angeles.

But what excites me is the really special round table taking place on closing night (Saturday, October 3, 2009) with Michael Aki, Chris Chan Lee, Quentin Lee, Justin Lin, Eric Nakamura and Rea Tajiri at 9:30PM after the free 8PM screening of Shopping For Fangs. The round table will be moderated by Giant Robot’s Martin Wong. (The round table is sponsored by Giant Robot and You Offend Me You Offend My Family.) And if that weren’t enough, there’s a free afterparty with sake provided by Sho Chiku Bai.

But don’t wait ’til closing night to check things out! There’s a bunch of other cool stuff during the film festival, so take a look at their entire schedule online and find out how to order tickets in advance.