Although I work mostly from home, a large residential construction project next door this summer has pile-driven me out of the house. Therefore, I’ve been searching for the perfect West Side coffee shop in which to work. While this subject has been picked before, and others have their own considerations, I have a challenging qualification to add to the  basic requirements of tasty coffee and free WiFi: the place has to be kind of quiet.

Before you ask, I’ll answer: (1) Yes, I’ve tried local libraries. Have you  been to one lately? Loud talking and even cell phone chatting is now standard practice. (2) Yes, I own noise-cancelling headphones, and use them frequently. (3) Yes, I realize that coffee houses have a long history as places of lively conversation. (4) A real office or shared workspace? Yes, I’ve thought about it. But how’s their coffee?

This came to my inbox.

John Leech, the founder of the Onyx Cafe in Silverlake/Los Feliz/Echo Park and beloved patron of the arts and truth in general has passed away.

It apparently happened around Monday or Tuesday March 17th or 18th and has been confirmed by the County Coroner. He apparently has no family but he has a trust and its executors have been notified. There is a votive memorial in front of the former location of the Onyx on Vermont Avenue (now Cafe Figaro) in Los Feliz. Initial planning for a fitting memorial to John has begun. More on that soon.

John was one of the rarest things in this world: a genuine philosophical Bohemian in the very best sense of the word who created an austere unpretentious Cafe which was, by his design, a magical safe zone for artists, musicians, poets, scientists, intellectuals and outsiders of all stripes…

END_OF_DOCUMENT_TOKEN_TO_BE_REPLACED

According to something called the HealthSaver Caffeinated Cities Survey, Los Angeles is one of the top five most caffeinated cities in the country. Tampa claims the #1 spot, followed by Seattle, Chicago, and New York.

Our neighbors in Riverside/San Bernardino are the least caffeinated, followed by Atlanta, San Diego, Minneapolis/St. Paul and Dallas. 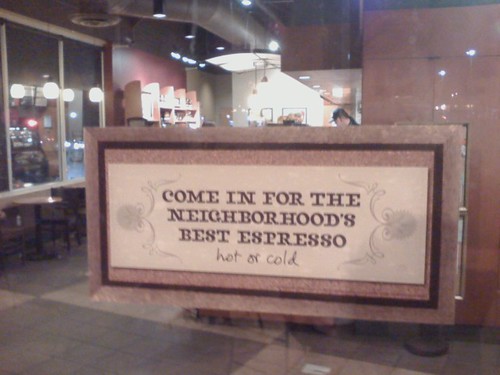 Spotted this sign on the door of the Starbucks near my place in Silver Lake and almost choked on my dirty chai. That’s a pretty steep claim considering that I consider Intelligentsia and Kaldi both to be in my neighborhood and they easily make the stuff Starbucks serves seem like muddy water. I mean, really, this is verging on offensive. Starbucks is passable and consistent, but the best in the neighborhood? Please. I’m guessing this is a national campaign, maybe we should start a list of Starbucks locations and the “much better espresso option” nearby. Is there a Starbucks and a better place in your neighborhood?