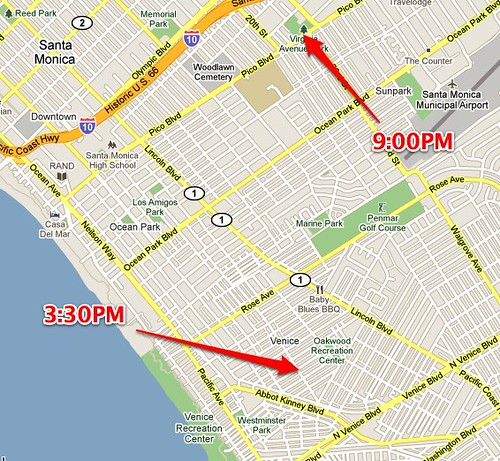 Yesterday afternoon there was a shooting in Venice, followed up by another in Santa Monica last night. Both shootings left one victim dead and countless others terrified. The LA Times Blog has lots of details on the actual shootings but makes no mention that these were both gang related shootings, a fact the LAPD confirmed with Yo! Venice. Residents of the area heard shots and began questioning things right away. A source which asked not to be named told me that both the victim in the first shooting in Venice and the shooters who were apprehended in the second shooting in Santa Monica are members of the Venice Shoreline Crips. The LAPD hasn’t confirmed that publicly yet however. If you’ve been following this at all you’ll remember that last year a huge sting brought down 19 members and earlier this year I spotted some of their tags on a wall in the area. Clearly the busts didn’t eradicate the gang as was hoped by many, and clearly something is going down right now. Hopefully it gets under control before more people get shot.

5 thoughts on “Shootings in Venice and Santa Monica connected?”