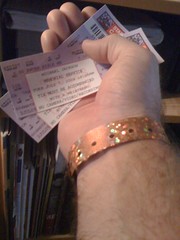 Looks like I couldn’t have chosen a better couple days to take off from work!

Having the good fortune to be one of the 8,750 out of a million-plus who requested tix, I just got back from biking over to Dodger Stadium running the tight gauntlet of police and stadium personnel from Sunset Boulevard up Elysian Park Avenue across Stadium Way and into “Dodgertown” to pick up the necessary ornamentation and documentation to permit me entry to and attendance at the Michael Jackson Public Memorial Service tomorrow at Staples Center.

It is pretty safe to say from the looks I got pedaling up to the ballpark that I will be the only one who claims their keys to the Kingdom of Jackopalooza via such an alien mode of transportation. Certainly my bike as well as the early hour helped me avoid any press gathered outside the Scott Avenue exit gate into Elysian Park.

14 thoughts on “LA Metblogs Will Be Represented At Jackopalooza Tomorrow”