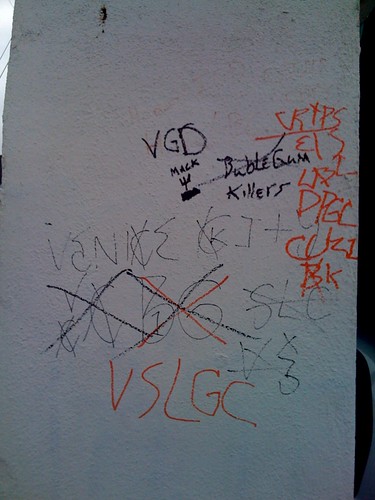 I spotted that on a wall near my house in Venice this morning and thought I’d post a little bit explaining exactly what is going on. Or what I can read into it anyway. This is gang tagging, which is very different that the colorful graffiti many talented artists have adorned walls in LA with. This is a message and if you know what you are looking at you can read it. I’m not 100% versed in every single LA gang so there is some of this I can’t decipher but some of it is pretty clear so this is what I got.

There are three gangs represented here, the first to write on the wall used a thin line black ink pen, that was followed up by the thicker black ink, and finally followed up by the orange ink. The first one to write on the wall using the thin black ink I think is a clique of the Culver City Boyz, though I don’t know exactly which one. They made the initial mark which included “Venice City VCCBG” The CB of which I believe is Culver Boys though I could be mistaken. They also included SLC and VX3 and crossed them out, those refer to the Shore Line Crips and Venice 13 gangs and since they are crossed out they are showing that they are none too fond of them. Since those three gangs have a history of not playing nice that would make sense. Additionally all of the “C”s in the initial tag are crossed out which is a dis against any Crips gangs which would further my suspicion that the Culver Boys were behind it. The small “k” in the “C” in “City” also means “killers” in a “crip killers” kind of way. Anyway, this is just a territory grab tag, it’s saying “we were here” for the most part, but in a rather aggressive way.

After that the thick black marker writer showed up and this is the one I know least about, I think VGD refers to the Varrio Grande Decoto but I didn’t know they were in LA as I’ve known of this as an SF gang, specifically located around the Mission District. So VGD could mean something else. Anyway, someone called “Mack” from that gang showed up and crossed out the VCCBG part but left the rest which would indicate he is also reping Venice City but doesn’t like any of the gangs already mentioned. The enemy of my enemy is my friend doesn’t really apply here.

Finally the much talked about Crips show up themselves and happened to have an orange marker with them. VSLGC stands for Venice Shoreline Gangster Crips I think. They crossed out the first tag and then actually listed a roll of who was probably there at the time, that’s the orange list on the upper right. Each of those is the name of an individual member. You can also notice that the “B”s are crossed on in their own text, which of course points out that, being Crips they don’t like Bloods.

So the take away from all that is really that all these folks are occupying the same space and not happy that they have to share it with anyone else. Should make for a fun summer.

5 thoughts on “The writing on the wall”