Liza Richardson, filling in for Jason Bentley, was responsible for the morning jangle on KCRW’s Morning Becomes Eclectic today. As much as I like the direction in which Bentley has taken the station’s flagship program, her line-up of tunes this morning was mesmerizing– a looping and swirling departure from Bentley’s sensibility. Throughout, I kept the live playlist window open on my computer and jotted down a list of artists to follow up on.

I only occasionally catch Richardson’s evening show on Saturdays (8-10 PM), but maybe a mix of DJs on MBE would be an idea worth exploring. The woman has ears.

But then again, you would expect that after her music supervising work on projects like the movies Y Tu Mama Tambien (earning her a Grammy nomination) and Lords of Dogtown, as well as the dark TV drama Friday Night Lights and the Apple iPod “Silhouettes” ads.

Driving down Sherman Way, I glanced at these signs painted on the side of the building. It didn’t register until I saw the different addresses. There has to be a story here. In my head, it’s something as dramatic as the cake shops on Fairfax. I’d be upset to find out if the reality is more banal.

While Glenn Miller was #1 on the charts with Pennsylvania Six Five Thousand, the Great Atlantic & Pacific Tea Company was #1 in the nation with 16,000 stores.

One of those A&P supermarkets was at Sunset & Fairfax. The year was 1940.

I just received a registration renewal notice for my six year-old car, and the fee jumped from $216 last year to $306 this year. That’s nearly a 42 percent increase for a car that is of lesser value than last year.  Most of the total fee ($220) is comprised of the “license fee.” So this is what trying to fix a budget deficit looks like.

At the same time, Los Angeles leads the nation with the worst roads of any urban area, which add a whopping $746 per year in extra costs for each Los Angeles metropolitan area motorist.

Isn’t this a bit like being tortured and then receiving a bill for a blindfold, a waterboard, and increased water usage?

Looking for art that’s not in a stuffy gallery setting? We’ve got just the thing. Tonight check out Block Party, a one night tour of apartment exhibitions in Highland Park.

The tour consists of three exhibitions hosted by curators Kiki Johnson from Artist Curated Projects, Kate Hillseth from Young Art, and Daniel Ingroff and Paul Pescador. The apartments are in close proximity and guests can tour the three venues during the evening, like a block party. Hence the name.

More info behind the jump!

END_OF_DOCUMENT_TOKEN_TO_BE_REPLACED

You be the judge!

Last night’s preview party was fantastic, but let’s face it, it was just a warmup for tonight’s huge bash.

No invite required, so just show up to the

Well, I’m aaaaaaalmost there. My “Bike Every Day In May” campaign has been a success so far and I’m cranking toward the finish line this Sunday. To get there I’ve got another unique ride planned for Saturday — the Frank Lloyd Wride — that I’m posting here in case it strikes anyone’s fancy to get on yer bikes and come along with me to check out four of Wright’s stuff conveniently grouped around Hollywood.

But wait, there’s more! In addition to stops at the Ennis, Freeman, Storer and Hollyhock houses, we’ll be visiting the Monastery of the Angels off of Gower (because I’m jonesing for a loaf of the nuns’ famed pumpkin bread), and also stopping for breakfast (flannel cakes, FTW!) at Musso & Frank’s.

Trust me, I’ve got it all logisticated. We’ll meet at the usual place, Silversun Plaza (corner of Sunset and Parkman in Silver Lake), where our stops will be (in order): Ennis House, Monastery of the Angels, Storer House, Freeman House, Musso’s, and Hollyhock House (where docent-led tours are available for $7). Here’s what the mapped 17.6-mile route looks like, and here’s something else kooky I figured out after the jump:

END_OF_DOCUMENT_TOKEN_TO_BE_REPLACED

I am so excited to announce that two of the rescued dogs recently featured on LA Metblogs have been adopted!

Congratulations to Blue Bell, who was nearly dragged to death behind a truck back in December, and also to Chuck, who is actually my former foster dog! Both of these lucky dogs are finally out of the shelter and have been adopted into permanent homes – hopefully forever.

Infinite thanks to all the readers who helped spread the word about these awesome animals. 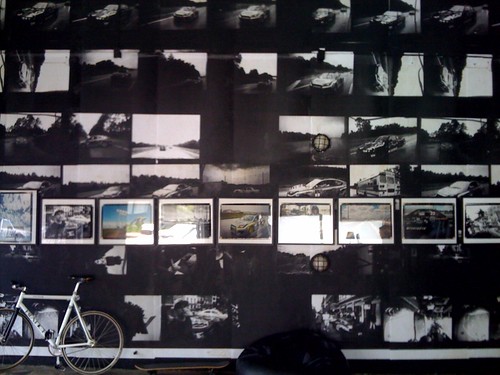 Heading home from running some errands I spotted something that looked familiar and stopped in Rogue Status in Venice to find a few photos by Estevan Oriol gracing the walls. It’s not a full exhibit, but if you are in the neighborhood it’s definitely worth taking a look at.

A presidential unwelcome (by proxy) is extended to an opposite-sex marriage advocate.

Would gay people ever allow themselves to be reduced to the situation that occurred this morning at Los Angeles International Airport as President Barack Obama was preparing to depart? If I may speak for the entire gay population of the universe, I don’t think so.

A self-declared “Roman Catholic preistess” and, um, journalist, named Brenda Lee from the Georgia Informer attempted to personally deliver a letter to Obama this morning as he boarded Air Force One at LAX asking him “to take a stand for traditional marriage.” Her attempt was denied by Secret Service, as well as a White House staffer. One thing led to another and before long she was being carried kicking and screaming across the tarmac away from Air Force One.

In the past, Obama has said he believes marriage should only be between a man and a woman, but it remains to be seen when he will address same-sex marriage again. Considering it’s the number two story this week (behind his nomination of Sonia Sotomayor to the Supreme Court) due to Prop 8 being affirmed by the CA state supreme court and a surprise appeal in federal court, his continued silence so far has been DEAFENING.

Famous Monsters of Filmland, that pioneering fanboy magazine that focused like a frickin’ laser beam on Hollywood’s old school movie monsters, and the acting legends–Karloff, Lugosi, Chaney–-who brought them to death, er, life, is back and wants to suck your blood.

It’s comforting to know that even though its founder, Uncle Forry (pictured far right), now spends his nights haunting the Ackermansion, his lifelong passion carries on from beyond the grave.

Famous Monsters–which now appears to be a digital-only resource–is celebrating this weekend with a special film series. They’ve joined forces with the American Cinematheque to present two double features: Son of Frankenstein (1939) and Ghost of Frankenstein (1942) on Saturday night; and Dracula (1931) and House of Dracula (1945) on Sunday night. To help introduce the films, Bela Lugosi Jr., Sara Karloff, Carla Laemmle, Janet Ann Gallow and Jane Adams will be on hand. Full details here.

And now, if you’ll excuse me, I think I hear my mummy calling.

I discovered Doughnut Hut via the troubled Yelp, where folks raved about its selection & fresh flavor. I’ve since stopped by a handful of times for a dozen doughnuts to take to work. Today, I stopped my rabid acquisition of ‘nuts long enough to take some photos.

END_OF_DOCUMENT_TOKEN_TO_BE_REPLACED

Ahhh, the beach life. Spotted this beauty on Washington near the ocean the other evening. What especially caught my eye was the cupholder. That’s some serious cruising.

Air Force One touched down at LAX this afternoon at 12:55pm, bringing President Obama to southern California for an evening fund raiser in Beverly Hills for the Democratic National Committee. Although the President will spend the night in Los Angeles, he will make no public appearances and will depart early tomorrow morning.

I was somewhat disappointed that the President turned immediately toward the helicopter when he reached the bottom of the stairs. I had hoped that he would approach the press pool, even if only for a few questions. Sadly, not even a nod in our direction.

What it’s like to stand in the shadow of Air Force One and more (better) photos after the jump. All pics, including the one above, gain both size and awesomeness when you click them. Go! END_OF_DOCUMENT_TOKEN_TO_BE_REPLACED

Obama is back in town today for a swanky, $1,000 to $30,400 (that’s $thirty thousand, four hundred) per couple ticket fundraiser at the Beverly Hilton.  A co-worker returning from lunch just told me that parts of Santa Monica Boulevard already are shut down, and traffic around Century City is completely snarled.  Also scheduled at 6pm outside of the Hilton is a rally/protest, presented by Equality Network (who makes the dubious declaration that Obama is the the “most LGBT-friendly president in history”), to call Obama to act on his commitment to LGBT rights.   For those of us on the Westside: good luck getting home.