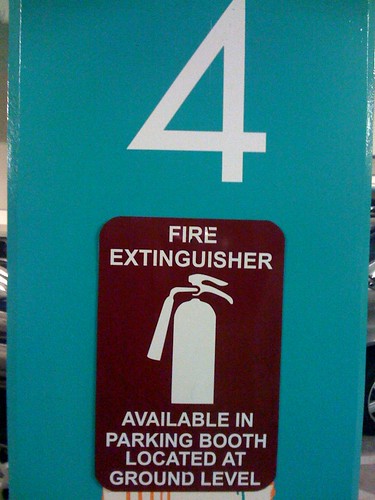 If you happen to park in one of the Culver City parking structures near Main Street and Culver Blvd and leave your car on one of the five floors of parking, you’ll be relieved to know that in the event of a fire there is one fire extinguisher down in the ticket booth on the ground floor.

Seriously. Every other parking structure I’ve been in in my life like hundreds of these things all over the place, at least one in every corner on ever floor. When I ran a retail business in LA that was basically one large open room the fire inspector made sure I had two. How in the world does Culver City think it’s safe for this place to only have one? If there is a fire on the 5th floor, someone has to run down 5 flights of stairs then back up to even think about putting it out. Really???

4 thoughts on “Dear Culver City, This can’t be safe.”