I’ve posted in the past about my encounters with stray animals being on the increase across the city, and how I elected to carry a ziplock full of kibble when — not if — I find myself biking past an abandoned dog. Sadly my attempts to provide these discarded creatures with something as trivial as a snack are almost always rejected because the animals are either afraid or disoriented or hurt or because I’m just a scary looking dude in my black helmet, shades and clickity-clackity bike shoes. Whatever the reason, it is heartbreaking and I usually end up depositing the food and clearing the area in the hope that they might come back and get it later.

Disappointment aside, I refill the empty baggy the first chance I get because it’s not about getting love, it’s about reaching out with some. But still, there are those rare occasions when I find myself recharged from being on the receiving end of some canine appreciation, such as with today’s streetworn pit bull found scrounging the gutter for some food on Jefferson Boulevard just west of Redondo Boulevard: 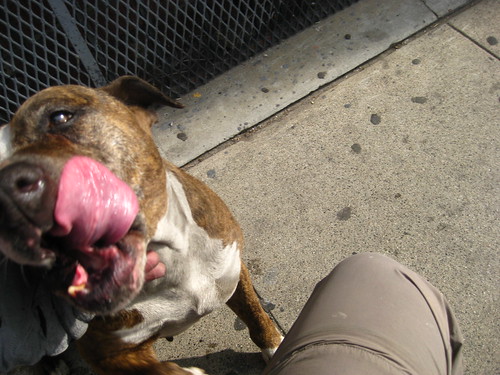 More after the jump.

When I first spotted her and pulled the bike onto the sidewalk in front of the auto mechanic, she gave me a sideways glance and moved away so I braced myself for another in a growing group of dogs understandably unaccustomed to the kindness of strangers. But then something different happened: she stopped. As I clucked my tongue and pulled the kibble out of my backpack, she stayed put assessing me, and as I knelt down (camera at the ready, of course) she came right up to me. 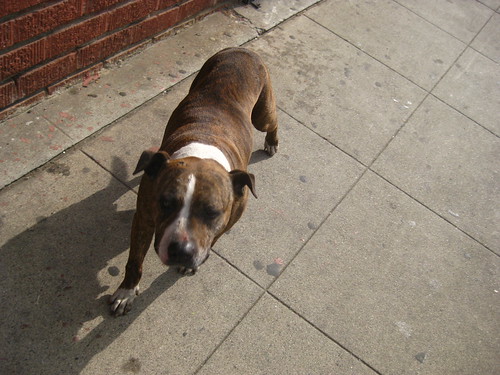 I immediately offered her the jerky treats I had in the bag and she gobbled those down. Then I poured the kibble in a pile by my knee and she set upon it voraciously until every last bit was gone. 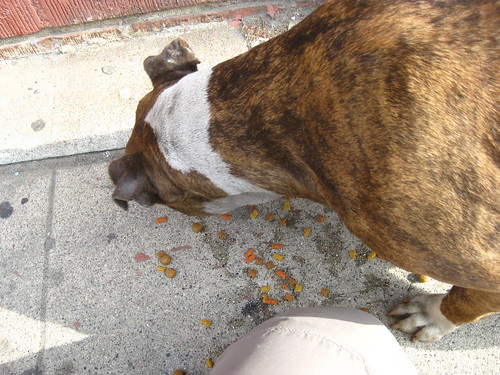 Afterwards the old gal sat with me and despite her being very much in need of a bath I stroked her strong neck and told her what a wonderful lady she was. Eventually she put a paw up on my leg and boosted herself up to give me a sloppy wet one on the cheek. My heart soared. And broke some more. 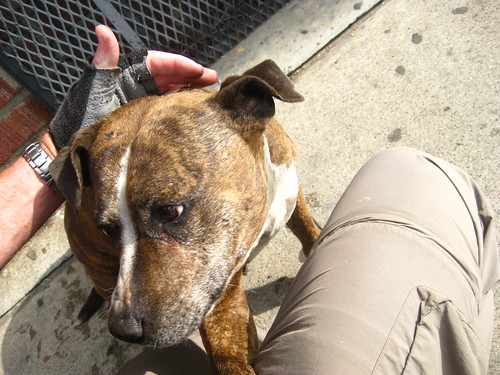 Then I stood up and told her I wished I could stop everything and instead make it my priority to get her someplace quiet and safe and clean, but I think she knew better because instead she mosied past me on down the street and past my bike and around the corner without much in the way of a look back as if to say don’t sweat it man, what you did was enough.

And maybe it was. But it’s weird feeling joy and sorrow concurrently. Still, it’s infinitely better than just sorrow.

Anyway, I’ll be filling up the baggy again tonight for the next time. Because there will be a next time. In the meanwhile here’s a still of the fleeting timelapse video of the meeting captured on my bike’s ever-present handlebar cam: