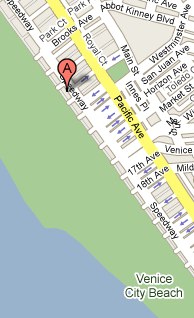 Around 8PM there was a shooting at 1101 Ocean Front Walk and right now several blocks around there are taped off and around 15 officers still there. According to the police on scene and a few residents of the area one vendor shot another and the victim is in critical condition and probably won’t live. Witnesses said police officers handcuffed one “scraggly druggy homelessy looking guy in his 20” about an hour ago and drove him off. There’s no official word about what the dispute was over but according to the vendors and residents I spoke with there’s been a fairly noticable uptick in violent crime over the past month or two with people suspecting the economy has something to do with it and most altercations between vendors are cash related. One resident told me they think it’s on the rise because these are “people on the edge getting pushed over edge.”

While many of the vendors are legit, there’s also a pretty widely known drug dealing atmosphere as well which has been growing and leading to the problems. One vendor said “our days are numbered because they (authorities) will shut vending down altogether if crackheads/violence continues.” On the positive side people who live nearby said police were on the scene right away said they know about the problems and there’s a fairly major crackdown underway. That’s all the info I have at the moment, lots of news crews around now too so I’m sure there will be more details soon.

Update: According to KTLA the suspect is still at large.