This has to stop. I know we’re in the middle of a Depression an economic downtown, and you’re just looking for something to make you feel better. To make you feel happy again. To forget all about 2008. You’re looking forward to Christmas. Yeah, I dig that.

But, this does not excuse breaking the rules.

I can forgive the early shopping. I can even let slide the early light displays all over town. What I cannot forgive, is you buying a Christmas tree on November 30.

I’m talking about you, Mr. Mercedes SUV, rolling through NoHo at 12:34PM on Thanksgiving Sunday. Sure, the 7ft. Douglas Fir tied to your roof may look great tonight. But, your tree will be dead before it counts.

Nobody likes a dead tree on Christmas. Nobody.

Reminded of the rare astrological occurrence by Julia here yesterday I clambered with tripod, camera and long lens up the steep angle to the highest most point of my Silver Lake rooftop — now forever more to be known as Campbell Observatory (Elevation 245′) — and snapped a series of shots, the thumbnail of which at right really doesn’t convey the awesome that is the unique convergence of Venus, Jupiter and the grinning moon. Clicking it for maximum biggitude helps marginally, but still… taking pix of bright faraway things in the night sky while trying not to fall off a steeply pitched roof is not my forté.

I’ve been told that Los Angeles should expect a sonic boom today at about 1:25 p.m., as the Space Shuttle lands at Edwards Air Force Base. Supposedly, when this has happened before, the boom could be heard as far away as West L.A. Is that an urban legend? We’ll soon find out.

UPDATE: I Just heard it! A double boom! at 1:20 p.m., all the way at the Marina, while watching the landing on the news and hearing the announcer say “two sonic booms signaling a landing at the California coast.”

It’s true, hard to believe but true. Five years ago today we launched this site, which lead to the creation of the entire metblogs network. Here’s Jason’s first post on the site ever and my followup announcement. It seems like forever ago, a whole different world back then and yet still kind of the same on so many levels. We hope you’ve enjoyed the last 5 years, it’s certainly something that changed our lives.

(And I don’t mean the movie kind.)

For the next few evenings, Venus, Jupiter and the crescent moon will come together for a gorgeous show. Sunset is at 4:44pm for the next three days and just after, as the sky darkens, look to the southwest to see the three heavenly bodies hanging out together. Just another thing to be grateful for this holiday weekend.

Click on through to the other side for sky maps showing exactly what to look for over the next three nights.

(Moon/Venus image by Kaippally, found on Wikipedia and used free under the GNU license.)

END_OF_DOCUMENT_TOKEN_TO_BE_REPLACED

While some supporters of Proposition 8, like the Mormon Church, are pointing to the black vote in California as proof that same-sex marriage is a moral issue rather than a civil rights issue, some blacks who support same-sex marriage are angered at being unfairly blamed for the passage of the proposition.

The editorial concerns the Fair Political Practices Commission of California’s investigation of the Mormon Church and whether it broke state laws by not reporting campaign-related expenditures. Californians Against Hate founder Fred Karger filed a complaint, accusing the church of improperly funneling millions of dollars in contributions to the pro-Prop 8 campaign. If proven true, the commission could fine the church $5,000 per violation plus sue for additional money.

The opinion column by Charles M. Blow, who is black, takes on the issue of the black vote’s role in the passage of Prop 8. He begins by stating:

We now know that blacks probably didn’t tip the balance for Proposition 8… However, the fact remains that a strikingly high percentage of blacks said they voted to ban same-sex marriage in California. Why? END_OF_DOCUMENT_TOKEN_TO_BE_REPLACED

Invented by German-born chemist Peter J. Schlumbohm in 1941, the Chemex Coffee Maker has been in production for the past five decades. To make the one-piece drip filter utensil, Schlumbohm combined a modified heat resistant glass funnel with an E-flask, a widely used type of laboratory flask. He added a two-piece removable wood collar with leather tie to serve as a heat absorbing handle. The protruding “belly button” marks the flask’s half-way point.

Available at Intelligentsia Coffee in Silver Lake, Groundworks in Venice (Rose Ave. location) and on the official Chemex site, the Chemex Coffee Maker is also included in the design collections of the Museum of Modern Art and the Smithsonian,

If you don’t knit this won’t mean much, but if you do your heart will flutter when I tell you that UNWIND is full of Koigu KPPPM!

The UPS man has driven away and the store – for the moment – is filled with this amazing yarn.

Made it stupidly small batches, delivered only once a year, and almost impossible to find. 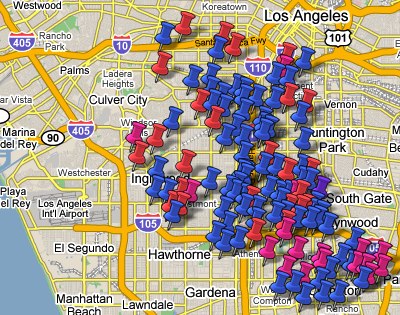 Someone has put together a not totally complete but still very interesting Google Map of the gangs of LA, or some of them anyway. check it

Today, I managed (barely) to get in front of the frenetic Thanksgiving eve shopping tsunami at my local Trader Joe’s in Silver Lake. Arriving a little past 3 PM, Hyperion Ave. was just beginning to back up with a flood of drivers inching their way into the too-small lot. I braced myself as I walked into the store but to my surprise all was calm, the few lines at the cashiers were only two or three deep.

I pounced on the few items the bf forgot on his early morning food gathering trip (berries, butter) and then made my way to the wine aisle. Although the rest of the store was relatively empty and calm, the wine aisle  was crammed with people, concerned looks on their faces as they plucked bottles willy-nilly from the shelves and checked items off of lists.

A woman who was staring at shelves loaded with beer called out, “I can’t find the beer!” Her companion rushed to her side, got down on his hands and knees and peered into the lowest shelf at ground level. “Is it there?” she asked. “I think I see one in the back,” he said earnestly.

As they effectively blocked passage, a logjam of shopping carts and baby strollers pinned shoppers into place for a few minutes until they located the elusive six-pak. As things started moving again, I hoisted my basket and squeezed through the maze of flesh and metal, making my way toward the cashiers. The express lines were still short so I joined the one nearest the door. By now people were pouring steadily into the store.

Five minutes later, I was out the door and into a downpour. Driving home on the slick streets, I gave thanks early like only a last minute shopper can.

The Los Angeles Business Journal is reporting that Rick Caruso, the man behind the Grove and the new Americana at Brand in Glendale, has been named to the Coliseum Commission by Governor Schwarzenegger.

The Commission is a state and local authority that oversees the Memorial Coliseum, two-time site of the Olympic Games and home stadium to USC Football.

“I look forward to working with my fellow commissioners to enhance this great icon of our city and ensure its future as a dynamic, profitable and appealing venue,” Caruso said in a statement.

Speculation has already begun on Caruso’s plans for expansion.

Our thoughts are with our brothers and sisters in India. CNN’s latest estimate has at least 78 killed in a coordinated terror attack in the city of Mumbai.

For eyewitness accounts, head to Mumbai Metblogs or the Mumbai Twitter Group.

For many, the ultimate shopping destination was Eighth & Broadway in Downtown Los Angeles, across the street from the Rialto.

It was the May Company Department Store. The year was 1942.

Photo from the USC Digital Archive

Last weekend, drawn by the promise of Munch and Gauguin, I visited Gouge, the Hammer’s current exhibit on woodcuts. If you’re looking for something to do this holiday weekend, I say, go to Gouge. It exceeded my expectations. In addition to those “fine art” woodcuts I was anticipating by Gauguin and Munch (and Kandinsky, Matisse, and Vallotton among others), there were woodcuts with a religious theme and a nice sampling of activist woodcuts.

Among my favorites were Joseph Váchal’s Seven Deadly Sins (they are so cute–they look like Pokemon sins) and Artemio Rodriguez’s The Triumph of Death which is one of the large amazing political pieces. Other Rodriguez fans may be happy to know that next weekend, La Mano, the press Rodriguez helped to found, is having it’s annual art sale: December 5-7, 1749 N. Main Street.