Sean first posted about the in-progress move here a couple weeks ago, and yesterday was the first opportunity I had to bring in a front wheel desperately needing a new hub/rebuild and step inside the giantness that is the new home of Orange 20 Bikes in the famed Bicycle SquareQuadrantZoneDistrictRealm. DotCom. Also known as the corner of Heliotrope and Melrose in East Hollywood.

Turns out my timing was as impeccable as my taste in homegrown velocipedic establishments as yesterday was their first day of bustling operations in their new castle: 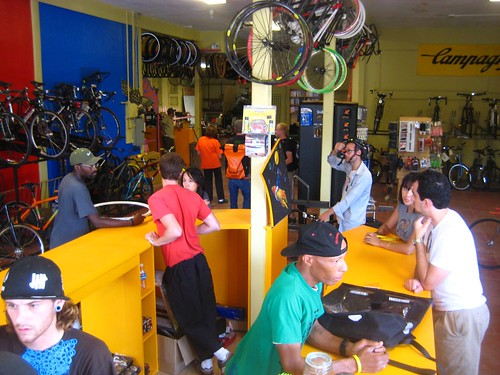 After stepping inside and gaping at the absolute vastness of all that additional square footage I made my way back across what may have been a change in zip code to the service/repair area — itself easily as large as the entire shack that was O20’s first home across the alley out back.

Greeted by proprietor Jim C. I guesstimated that the place must be three billion times bigger and he corrected me down to reality.

“Funny thing though,” he continued. “All the stuff you see  — nothing’s new. Everything in here was moved over from the old place. We haven’t bought anything new yet.”

“No way. Where’d you keep it over there?”

A few more minutes and my front wheel was in Jim’s good hands and I snapped a few more pix of the place before heading out.