You might recall last week’s post in which my bike commute timelapse capturings allowed me to illustrate on a frame-by-frame basis the hyper-awareness of a praiseworthy motorist whose cautious attentiveness allowed him to anticipate the child cyclist darting out in front of his vehicle and avoid a collision.

This morning, it’s entirely the other way around. There is no praise or thanks for the southbound motorist who viewed her stop sign at 4th Street as merely a suggestion. Only disdain and incredulity. And a bargain bouquet of cusswords.

There’s several things worth noting if you click to magnificate: 1) In the first frame she’s nowhere near the crossing; 2) In the fifth frame (enlargement after the jump) her expression is just the beginning of her mid-intersection realization that she was in the midst of a total FAIL. Her look evolved into a wide-eyed and gape-mouthed “Ohhhh!” as she turned and saw me looming beside her driver’s side window.  3) Also in the fifth frame one can make out nice scrape along the car door, shining through like a white badge of lame that’s potentially illustrative of a collision earlier in her commute or perhaps a past poor parking job.

Fortunately the timing involved with her under-caffeinated lack of road rule obeyance was perfect as the only thing she plowed through was the empty space between my front tire and the rear bumper of the car in front of me that had the foresight to speed up enough to clear the intersection before she got there.

Had I been a couple seconds ahead of my position the images I would have captured and the angles involved would have been decidedly different.

END_OF_DOCUMENT_TOKEN_TO_BE_REPLACED

There’s a piece in Dwell Magazine about Los Angeles where they talk to Matthew Coolidge of the Center for Land Use Interpretation about some of the things that make LA so very LA. It’s pretty fantastic as you can tell right from this opening paragraph:

“Los Angeles is a polarizing city. To some it is a paradise of beautiful beaches, buxom bodies, Beverly Hills, and the world’s most pimped-out cars—–a place where you, too, could be discovered, your name in lights, your star forever embedded in the Walk of Fame. To others, it is a glimpse of the apocalypse, one of the forecourts of hell, with its race riots, air pollution, earthquakes, wildfires, and overwhelming extremes of stupidity. Los Angeles is the kind of place some people refuse even to visit.”

The Q&A that follows is fascinating and well worth reading for anyone who loves or hates LA. Or both. 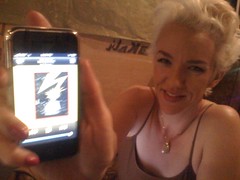 If you are at all interested in any kind of publishing or creative production you should know all about Creative Commons already. If you don’t, tonight is a good chance for you to learn. In short CC allows you retain ownership and some rights to work your create, while still allowing other people use, adapt, and pass it on, but if you come out to the CC Salon at FOUND Gallery [1903 Hyperion Ave. Los Angeles, CA 90027] tonight you’ll hear much more detailed first hand accounts of how it works. Xeni Jardin [pictured here] of Boing Boing tv and Casey Caplowe, Creative Director of GOOD Magazine will be presenting and answering questions about how they use CC and how it’s benefited them, and how it can benefit you too. Come out, it’ll be fun!

When was the last time you went to a drive in movie?

I don’t know about you but as a kid I loved the drive in.  Unfortunately, by the time I was old enough to go to the movies, drive ins were already a dying breed.  Before they tore down the drive

in theater in my hometown I saw The Blues Brothers, Star Trek II (a.k.a. the best Star Trek movie)  and E.T there, but the movie I remember most was the last one I ever saw in a drive in, 1985’s god awful (and inaccurately named) Perfect starring John Travolta and Jamie Lee Curtis.  My family and I saw it just before the theater was shut down for good, when it had fallen into disrepair and they stopped enforcing the no alcohol policy.  We arrived early with a van full of people and beer and even that didn’t help the movie.  Unfortunately, by the time the credits mercifully rolled none of the adults could drive and I was only 11 so we saw Perfect twice that night.  It was a terrible way to say goodbye to the drive in.  In the years since the Perfect disaster I’ve wanted to have a better drive in experience, with a good movie or at least one that isn’t awful.  Of course, drive in’s are hard to come by in LA.

If you would like to experience the fun of the drive in right here in LA I’ve got good news.  Hollywood Mobile Movie has teamed up with The Steve Allen Theater to present classic drive in features for only 5 bucks every Friday night through Halloween.  You just show up. park your car, tune in your radio and watch the movie.  No hassle and no need to give my parents field sobriety tests.  The gates open at 8:30 on Friday nights with all screenings starting in the parking lot at 9 with (in case of overflow it will also be shown in the theater).

This Friday’s feature will be The Demon Seed from 1977 starring the always fantastic Julie Christie.  A full list of screenings can be found at the Mobile Movie site along with everything you’ll need to know to enjoy the movies.

The Steve Allen Theater is located at 4773 Hollywood Blvd. in Hollywood (two blocks west of Vermont).

The anti-Scientology group known as Anonymous announced that at 7:30am this morning they will be picketing outside of the New Village Academy private elementary school in Calabasas due to the school’s use of “Study Technology” developed by Scientology founder L. Ron Hubbard. New Village Academy was founded by Will and Jada Pinkett Smith.

We have decided that we will stay as far away as possibly away from the kids. None of us want to scare the kids at all. But this is a hugely profiled school and we want to bring attention to Study Tech. I personally think its robbing real education away from these kids. I am sure a few parents are unaware of what Study Tech is and most likely will like to know what we have to say. That is why we are doing it.

Benno adds that member of Anonymous have spoken with the Calabasas Sheriff’s Department to alert them to the protest.

A brief summary of what Study Tech is after the jump. END_OF_DOCUMENT_TOKEN_TO_BE_REPLACED

The LA Urban Rangers–a collective of artists, city boosters, history buffs, writers and other La City Nerd-types is hosting a salon at Farmlab a week from this Saturday. I’m planning on going.

So what will the salon entail? Chats about their past projects such as weekly field-trip-style tours of the LA County Fair, hosting workshops at architect/urban homesteading artist Fritz Haeg at his Sundown Schoolhouse, a guided tour of Hollywood Boulevard’s flora & fauna, and more neat stuff. Plus a bit about their new urban safari series that explores our local beaches. By approaching their subject matter with the scientific distance and nerdy enthusiasm of your average park ranger, they pull focus back from our usual myopic assessments of our local points-of-interest and help us to view it from a new, more holistic perspective. Which is cool. Drop me a comment if I should look for you there.

Photo of The Nickel Diner in Downtown Los Angeles from angelenic

The Fly, to be exact. The consummate anti-superhero movie is featured on stage and screen this month in our fair city. Wednesday night, the Arclight is screening The Fly as part of its AFI Directors series. Cronenberg and Howard Shore will be there for a Q&A afterward. (Yours truly will also be there, so if you’re going leave a comment to that effect. Maybe I’ll buy you some jujubees.) The screening is really just an appetizer, I suspect, for the main course The Fly The Opera which debuts at the LA Opera Sunday. I myself am not much of an opera kind of gal, but I may have to make an exception for this. Shore and Cronenberg collaborated with David Henry Hwang on the opera, which will be conducted by Plácido Domingo. So if you’re one of the five other people in the world who found The Dark Knight annoying, let The Fly function as narrative anti-venom.

This alarming news brought to you thanks to Xeni Jardin