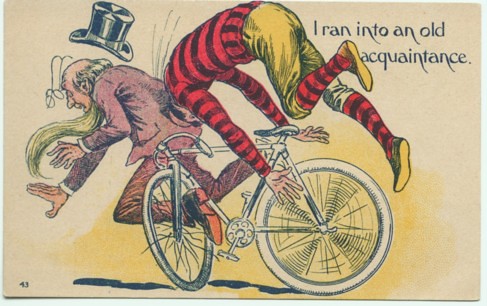 Hello friends! We know a more than a few of you reading this will go out of their way to ride a bike anywhere and everywhere they can. Even places that seem crazy! Attempting to survive while perched atop a frame of hollow metal with some wheels stuck on and conquer mountains, forests, deserts and even the freeway!

But more dangerous, more foolhardy and just plain more inconvenient for everyone involved… are those riders who choose to ride on the sidewalk!

We’ve read so many rants from people on bikes complaining about how dangerous the people in cars can make it for the people on bikes. Swerving, not looking out properly and sometimes just going out of their way to make life difficult for some cycle-jockey trying to save a few bucks and burn a few calories. So, it’s easy to see how someone on a bike might be inclined to retreat from the scary street to the relative safety of the sidewalk, where they can be the bigger, more imposing entity menacing typical occupants of the sidewalk, pedestrians.

Isn’t there some kind of law in L.A. against bike riding on the sidewalk? We all had to learn about how to deal with people on bikes when we got our driver’s license… slow down, go carefully around them, don’t drive in bike lanes, watch for hand signals, etc… but at no point did we ever learn about how to properly dodge out of the way of some speedster taking up most of the sidewalk while carrying bags full of meaningless goods like a decent American!

Also, we live in a fairly busy area, right near the tourist zoo that is Hollywood and Highland. The sidewalks are oft times difficult to navigate on foot much less while riding a wheeled menace. Every other day we see people on bikes looking all flustered that they can’t zip along and instead have to trudge and nudge through a dense thicket of euro/asian/midwest/etc. tourists while no less then ten feet away is a road packed with cars with plenty of room for someone on a bike to weave through and potentially become the fastest form of land-based travel in the immediate area!

Even if it is legal and lets say for the sake of argument that riding on the sidewalk is much safer and no pedestrians ever get hurt by the very conscientious riders of bikes in Los Angeles, why would one bother riding through such a famously overcrowded area… and be angry that it’s difficult to traverse?

Lets just end it by saying that Mark has terrible balance and has never successfully been on a bike… Unicycle? Yes. Bike, never. Steve probably rode a bike once, but has since made it a rule to never to anything physical for fun that can’t take place while in the shower.

So what do we know about it? Other than it sucks to have to minimally alter our path on the sidewalk to get out of the way of some cyclist hellbent on setting a new land speed record all over our shoes… beyond that, not much.

3 thoughts on “Bikes on the freeway, huh? How about the sidewalk!?”