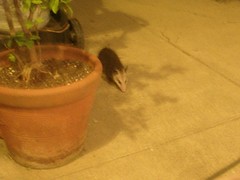 It’s been awhile since I posted and I do feel bad.  Really, really bad.  I’ve been hit with an allergic reaction that makes me quite uncomfortable and not a nice person.  Believe me, it’s bad enough that I can’t act right when it’s hot, but with the allergic reaction, I turn into something of a sociopath.

Since I can’t really leave my house because of the “disfigurement”, there’s nothing much for me to post.  I missed all sorts of cool events happening throughout Los Angeles and that’s made me even more angry.  I have been able to get outside the house at night, though leaving my property was still not an option.

I’ve been kickin’ it with this little guy for the past week.  He often shows up around 9pm and around 11, he comes nears me and just paces.  I’ve named him Origami and we have lots of fun.  Not really, but since I’m housebound, my concept of ‘fun’ has severely diminished.

But the heat’s gone away (for now) and my skin is kind of clearing up.  Got some weird looks when I went to the store this morning, so clearly I’m not fit yet for human consumption, but it’s a matter of time.  Soon, I’ll be back out in the city and able to talk to people without biting off their heads.

5 thoughts on “Creature of the Night”