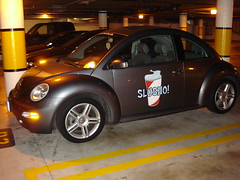 Hey friends! So I have to get this shit off my chest… It’s the story of a nerd and his dream, and how the state of California threatened said dream… But it’s pretty much about Steve and his Volkswagen Beetle, and the personalized license plate that the DMV denied…

UPDATE: I’ve decided to present you all with the original denial letter from the DMV. View in all it’s horrific glory after the jump!

Ok so some of you may or may not have seen my Volkswagen Beetle with Slusho stickers plastered on it zooming around LA, and the greater Culver City area. Now if you don’t know, Slusho is a fictional soft drink created by TV producer J.J. Abrams, and is featured on television shows like Alias, Heroes, and the Abrams produced film Cloverfield. Being the big nerd that I am, I jumped at the chance to feature the Slusho logo on my stylish Beetle, seeing as I became quite obsessed with the viral marketing for Cloverfield, and really dug the design…

I decided the logical next step for my obsessive fandom was to get personalized plates. A couple clicks on the DMV site, and the Slusho-Mobile would be complete! So almost 6 months later, I began to worry if I’d even get the damn plates at all. Just as I was about to forget about it, I received a letter in the mail from the DMV!

As my excited glowing eyes grazed the paper, I realized that it was not the joyful confirmation I waited impatiently for. No friends, it was a big fat stinking denial letter. As if I was being denied admission into a prestigious college, I began to shout obscenities. I woke up the dogs with my evil fury. I waited six months to be told, by mail, that the word Slusho “…could be seen as offensive, or inappropriate to some people…”. Offensive?! Inappropriate?! For fucks sake, I saw a license plate that said “SMEGMA”!!!! I shit you not! I saw it!

Ok, nerd rant over. For now all I can do is write to some head DMV person, beg them to re-assess the plate request, and to inform about Slusho, and why it’s NOT offensive and how my intention to own such a personalized plate is harmless, and without bad intent. Wish me luck, I sent the letter 2 days ago.

So, what do you guys think? Am I bitching about nothing, or do I have a legitimate argument here? Also, what crazy “inappropriate and/or offensive” license plates have you seen around LA? 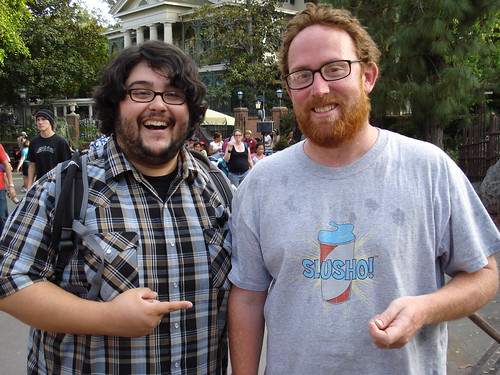 Above pic: Steve with a random guy at Disneyland wearing a Slusho shirt! 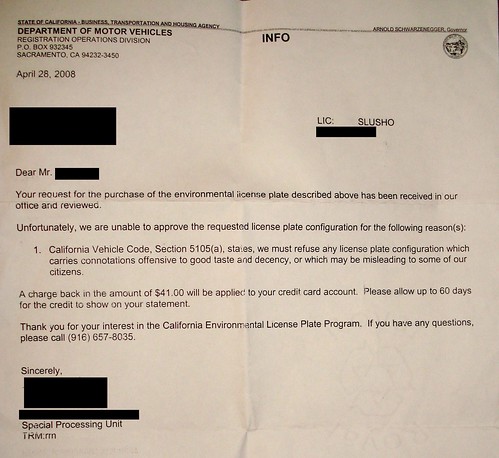 Exhibit A: The original DMV denial letter… Click to embigify.