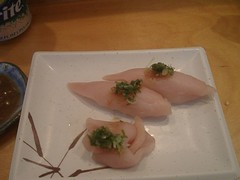 You see that? That’s THE best albacore sushi in the world…okay, Los Angeles County. We splurged and went back to Yoshida Sushi Bar for my husband’s birthday. We may be broke, but that tasty delight was worth it.

Yoshida’s is located in a nondescript strip mall thing on Huntington Blvd. in San Marino. Owner Yoshi, is always behind the bar with a joke and a smile. The bar, like most in LA, gets crowded fast, so make reservations if possible. Otherwise, there are tables in the main room and another eating section in an adjacent room. Service is quick and efficient, though they move a little too fast in cleaning up the plates.

Tuesday – Saturday they offer live uni, which you can watch get thwacked right in front of you. My husband said it’s the best uni in town. I’ll take his word for it. He also said that the oyster shooters there are tied for first. Salmon, halibut, shrimp, Japanese mackerel, sea bream, etc…has been consistently good the 3 times we’ve visited. The roll list is smallish, but they’re willing to make any roll you ask for and seemed delighted to try new twists.

Back to the so-delicious-it-should-be-illegal albacore: The first time we went, after ordering our usual, we asked Yoshi for suggestions. He said, “This is your first time here. You must try the one thing you can only get here and nowhere else in Los Angeles.”

“As long as it’s not Spanish mackerel, snapper or tuna*, I’m on board”, I replied.

Yoshi then pulled out a fish and took his tweezers to it. I assumed he was pulling bones. No, he was pulling the fish in perfect sushi-sized flakes. After working his magic, he presented us the plates, “It’s albacore”, he announced. I looked at him skeptically. Where was the sad torched skin with the pinkness inside? Where was the cup ponzu to make up for the new dryness?

“Try it,” Yoshi urged, “You’ll like it and be addicted forever and ever. I promise.”

My husband, daughter and I all picked up our pieces and ate. The promise of addiction was true. We were immediately hooked and each had 3 more orders that night. The fish is soft, but not mushy; subtly flavored, buttery and a taste explosion all at once.

I could explain why the fish is so delish, but I’ll leave it to Yoshi to tell you the tale of the fish.

*Yes, I know albacore is tuna, but I won’t eat the other two kinds.