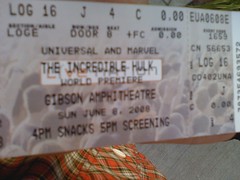 Today, thanks to my friend shdowchsr, Caryn and I got to see the world premier of The Incredible Hulk (short review: It rocked, really, seriously, so much better than I expected. Way to go Marvel and Universal! longer review here.) and we had to walk to green carpet to get there. Yes, the red carpet was green. Anyway, at the end of the entrance was a security check point. While I was initially surprised I wasn’t all that shocked. I’ve been to screenings before where they are clamping down on cameras and things. What was more shocking was the three metal detectors people had to walk through to get in.

Seriously, this was like courthouse level security. My initial thought was “oh crap, are they going to flip out on me because my cell phone can record video?” followed up almost immediately by “oh crap, forget the camera, I’m actually armed right now…” which is when things got a bit more interesting.

OK maybe “armed” is a stretch, but I was a boy scout and pretty much never go anywhere without a pocket knife because those damn things come in handy a lot. If I’m going somewhere with a metal detector I’ll leave it at home, but honestly wasn’t expecting that here. At the security line they were having people put their keys and phones in little baskets while they walked through so I thought I’d just throw it in there and play it cool. The security guards were asking people with larger bags if they could look in them for video cameras. I actually heard them say “do you have any recording devices in there?” to a few different people. When I handed them my stuff and walked through, the guy on the other side was perplexed. “Is this your knife” he asked? I told him it was and asked if that was a problem. He wasn’t sure. He turned to another security guard and said “are knives allowed” and was told “um, I don’t know, i think that’s a weapon.” A third security guard stepped in confirming that a knife is a weapon and that it wasn’t allowed in the theater.

Shit, what now? The first guard told me to go put it in my car, but when I told him I took the train there he turned to another and asked “can we check a knife with the video cameras?” – I guess if you had brought a video camera they’d be kind enough to check it for you. Anyway, no, there were no knife checking options available today. I asked what I could do and was told that there were lockers that could be rented just outside of the theater and I could put it there and get it later. I thanked them and Caryn and I left to go find these lockers.

After renting one and putting anything they might consider dangerous in it, we walked back and started thinking about how funny it was that they had all this security there, a really big show of force, but that they only seemed to care about recording devices and when presented with something that could actually be dangerous, they didn’t know what to do next. Going back through security the second time we noticed they didn’t look in Caryn’s purse at all, or in my sunglasses case. Both of which were small, but certainly large enough to hold that little pocket knife. I guess they assumed a video camera couldn’t fit in them so they weren’t a threat.

10 thoughts on “A Tale of Two Securities”