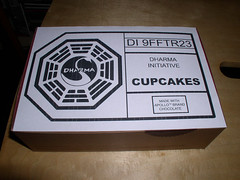 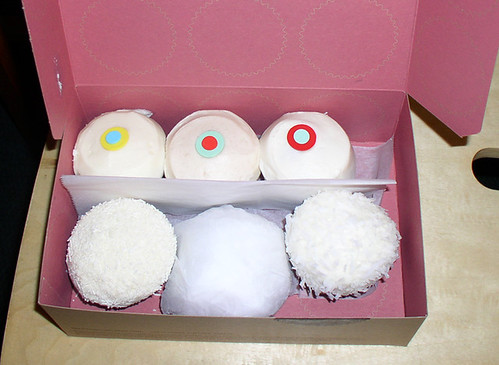 The cupcakes were the first and simplest to make LOST appropriate. We simply picked up some cupcakes at Sprinkles Cupcakes in Beverly Hills, grabbed some logos from Lostpedia, fired up Photoshop and followed one of the Dharma food labels as best we could. We printed it up on some label stock and stuck it on the box, easy and delish! 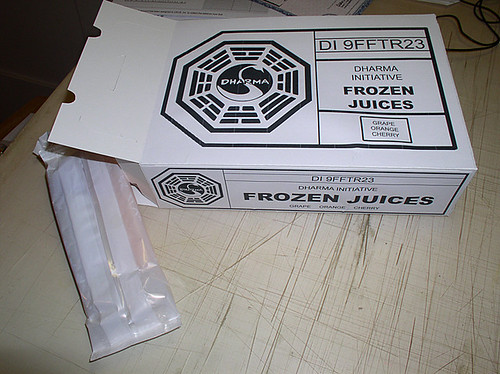 We got a bit more ambitious with the Dharma issue Frozen Juices. We ripped apart a Popsicle box, laid it flat and luckily, it turned out to be about 11×17. Tracing the outline of the box onto a sheet of bristol board, we were able to make our own, plain white Popsicle box to which we affixed some appropriate Dharma labels using a modified version of the cupcake template and the same label paper. 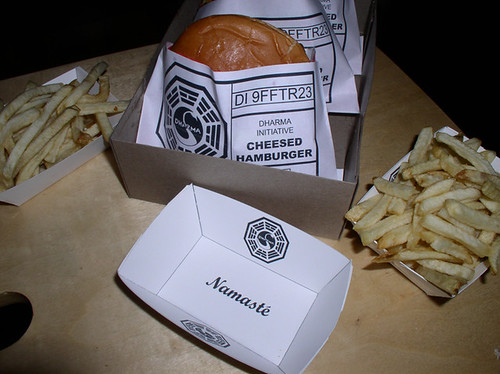 Armed with too much time on our hands and an odd compulsion to top what we did before, we decided it was time for some Dharma issue Cheesed Hamburgers! We went to the In-N-Out Burger on Sunset in Hollywood, bought a buncha burgers and fries and like the Popsicles, tore up the packaging and used it as a template to generate our own. Bristol paper was used for the fry holders as it’s sturdy and will absorb the grease. The old reliable label stock was used to go over the regular In-N-Out burger wrap. 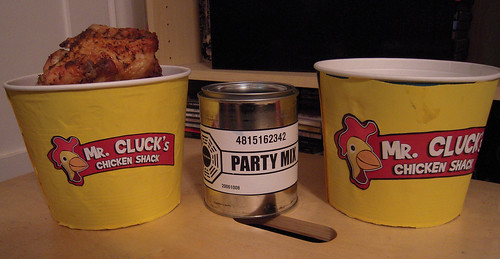 Metblogs own David Markland, regular LOST night attendee came up with the idea to bring over some of Hurley’s favorite fried chicken, Mr Clucks. He covered some chicken buckets with yellow paper, printed out some labels and stuck them on. The chicken came from Rock ‘n’ Roll Ralph’s on Sunset and it was surprisingly delicious!

We already have some ideas for what to do for tomorrow night’s sure-to-be frustratingly amazing season finale! Time permitting, they will be great and we’ll post some follow up pics in the comments.

Anyone else planning something special for LOST?