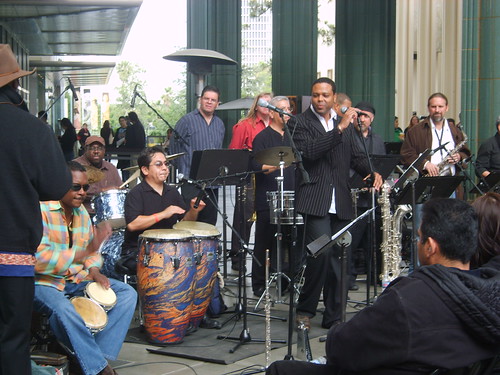 The show was phenomenal.  There’s no two ways about it. I’ve seen some great shows at LACMA, but I have never seen people dancing during the entire show.  NEVER.

The Jazz on the Latin Side All Stars opened the show with Lee Morgan’s Caramba.  Nice and easy way to greet Opening Night of the Latin Sounds series at LACMA.  My kids love the song and we dance to at least a few times a week.  Needless to say, they were pretty happy to hear a song they knew.  Next they went into my baby boy’s favorite song, The Last Bullfighter.  I had never known the name of the song, yet we always “play matador” when we listen to it.  This song is when the dancing on east side of the courtyard started.

The Jazz on the Latin Side All Stars are named after Jose Rizo’s KKJZ show.  They represent KKJZ when they play together, but each musician in the 15-piece band is an acclaimed artist in his own right.  For example, I always delight in seeing Justo Almario play tenor sax.  He was actually the first saxophone player I had seen live who made me pay attention to the instrument.   Imagine my delight when I saw him walking up toward the stage with is gear.  Almario received the first standing ovation of the night for his brilliant work on Justo’s Trane Ride, a salute to John Coltrane that contained a sweet call and response/duet between Almario and drummer Martin “Smitty” Smith.

Musical Director and flautist, Danilo Lozano, had me considering going back to my old instrument just so I could try to get good enough to play with the band.  His coordination was tight as musical director and the delightful sounds he emitted from his flute only added to the sweetness of the songs he accompanied.  His show piece, Danilo en al Flauta, all but ensured I was going to have to track down a flute and get back into playing. 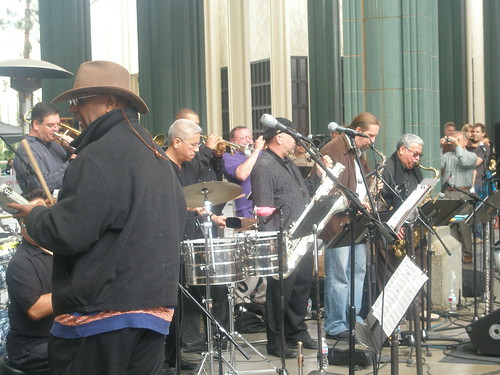 On Baila Mi Gente, new singer Adonis Puentes, showed great skilled in singing in a style that seems to lost to the younger generation.  I can tell you that the ladies and quite a few guys have decided that he was probably the hottest singer ever.  I sat there eavesdropping on a conversation with 3 women in their 60s talking in English and Spanish about all the things they’d love to do to him.  His vocals on Yo Soy la Rumba, made me like the song even more than I thought possible.

Everyone else was brilliant; percussionists Alfredo Ortiz (of Son Mayor) on congas, Marvin Smith on drums, Leo Perez on bongo, Victor Barrientos on cymbals, all of them were on the top of their game and gave each song a new layer.  Pianist Joe Rotondi, sax players, Rob Hardt, Scott Martin, trombonist Eric Jorgensen (we sat next to his large group of friends) and Jose Arellano were devastating, especially during their solos.  Trumpet players Bijon Watson and Sal Cracchiolo seemed to be having way too much fun, but I didn’t think they got featured enough for my tastes.

As I mentioned before, if you haven’t seen the Jazz on the Latin Side All Stars, you should really make the time to do so.  When on tour, the band represents the best of LA-based Latin Jazz, an art form that seems to be dying throughout the US, except for in Los Angeles. The lineup changes from show to show, as most of the musicians have their own bands and/or tour with other bands.  The next time the band plays together will be on July 18th at Union Station at the annual East LA Meets Napa festival.