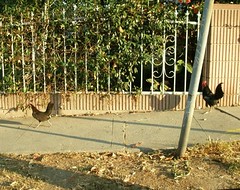 That’s the sound of my neighbor’s rooster. I first heard it in the middle of April and wondered what kind of animal made that sound. It took about 5 days for me to realize it was a bird, but I only learned a couple of weeks ago that it was a rooster.

Because of our proximity to Ernest Debs Regional Park, I assumed it was some kind of wild bird I had never heard before. I had considered tracking down the sound so I could take a photo of a beautiful laughing bird. Coincidentally, the day we planned to visit the Audubon Society is the day I learned it was a rooster.

I called it the Laughing Chicken. The kids who’s conversation I recounted dubbed it Roostyena…you know, a cross between a rooster and a hyena.

The rooster now imitates the crows and the pigeons. This morning the kids were fighting over a new name: Roostigeoncrow or Croostigeon.

3 thoughts on “The Laughing Chicken”