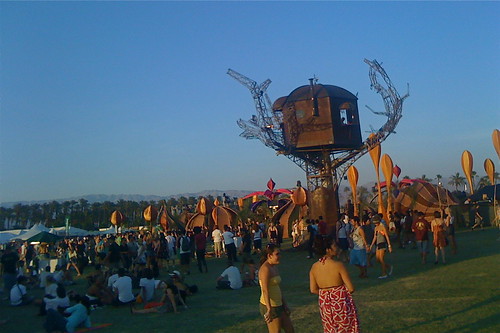 Friday at Coachella was, if not a relative ghost town then at least a very well attended garden party. Dashing about the grounds and sliding up to the front of a stage remained easy through most of the day and patches of shade were easy to find. Saturday, then, came as a shock to the relaxed sensibilities engendered by the previous day. Arriving at the Mojave tent at about half past three, we found that MGMT had already fired up their hipster electromagnet. Getting within eyesight of the band was more of a challenge than I was up to first thing in the afternoon.

So, after circling a bit, we elected to take in some punishing sun and listen to them play most of Oracular Spectacular. Of course, it would have been easier if they’d gone through it in album order. That way we could have heard “Time to Pretend” and thinned out the crowd. But patience was the name of the game. We waited through all of the psych-tinged journeys, learned that “Electric Feel” is maybe about an electric eel, and then got our dessert of summer-jam contenders “Time to Pretend” and “Kids”.

After fortifying myself with a veggie corn dog (oh, the fair food!), we made our way over to the Outdoor Theater (a.k.a., “the adult stage”) where a few hundred die-hard Pavement fans and their kids had been encamped for Stephen Malkmus and the Jicks. Arriving in a safari hat with his all star lineup, he blows out eardrums with meandering guitar journeys. There are jokes about not rolling, interludes about California weather math, how this is how Portland will feel in 2021, and saying hi to M.I.A. Now for my horrible confession: I was never a Pavement fan. It’s nearly a hundred degrees outside and this freeform stuff is doing nothing for me. I concede to feeling like a huge failure as a thirty-year-old man and give up and head for the VIP area to suffer through Cafe Tecuba while guzzling an energy drink.

All of a sudden, the early evening hours are clustered with too many bands to see and not enough time machines. I skim past St. Vincent. For some reason she is ringing bells and later, like a haunted radio transmission, inviting us all to marry her. Whenever I hear this, I think about how much I love her for naming her album after an Arrested Development catchphrase.

In what becomes a recurring trend, the Sahara tent is packed wall-to-wall for Hot Chip. Kids spill out onto the lawn and scale the girders for a better look. The mercury hasn’t yet started to fall, and the strobes incite all sorts of dancing for “Over and Over”, but I saw the band a few days ago and decide to see what Death Cab for Cutie are up to. Because I’m from Seattle, I feel that it’s within my rights to snob about how I really never need to see DCFC playing to thousands and thousands of people from a festival mainstage. They’re fairly good at it, and they still sound just like Death Cab is supposed to sound and look like Death Cab is supposed to look, but there’s some sense of incongruity about seeing them huge on monitors from hundreds of yards away (especially when they’re dipping into the back catalog, which I love them for doing). But then I hear them playing “Your Heart is an Empty Room”, my favorite overlooked track from Plans, as I’m striding across the lawn I stop and have a little moment and feel my faith in northwest indie mope pop fully restored.

For some reason, I make the mistake of deciding to miss Rilo Kiley in favor of waiting for Islands to tune their bass clarinet, hook up wires, and start a half an hour behind schedule (Islands really ARE forever). When they finally start, Nick Diamonds is wearing ghostly face paint and a bloody shirt. It’s an appropriate costume for the spooky theatrical tone of their new album, which they are bold enough to use as the basis for almost all of their set. (So much for my “play the goddamn hits” aesthetic). Squeezed between material that almost no one has yet heard is the triumphant entry of Busdriver for the rap section on “Where There’s a Will There’s a Whalebone”. And at the end, they bust out their epic “Swans” from Return to the Sea and the big melodic guitar figure sends a kid in front of me into spasms of joyful hippie-ska interpretvie dancing.

The overcrowding witnessed in tents earlier in the day was nothing compared to the scene at M.I.A. Spilling out for twenty or so dense yards outside were people desperate for a chance to get beyond the white gates. For a moment, I ride a forceful current of people and catch a glimpse as she kicks off her set with “Paper Planes”. Then, as quickly as the tide brought me in, another current of dazed kids fleeing crushing hazards swept me far far away. 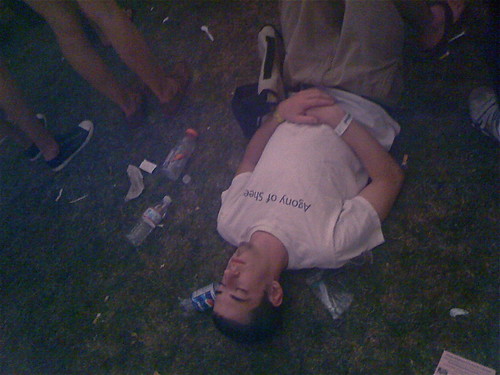 After all of this close-quartered heated overcrowding, I was feeling a case of the grumpchellas setting in. But then I went across the way to the Mojave tent for Animal Collective and it made me incredibly happy. Did I secretly hope that they’d play something from the Panda Bear album? Yes, I did. But did I think that they would? Not a chance. So, you can imagine my joy upon hearing them “cover” “Comfy in Nautica”. The flashing lights and modern primitivism built to a sensory overload that felt like neural reprogramming and suddenly I was in a good mood again. Anything is possible at Coachella: a big bag of balloons appears and spreads through the tent, and they round out their set with a huge, thoroughly inspired “Fireworks” medley.

The rest of the evening involves squeezing through a mob scene to get into the swamped VIP area. Did Goldenvoice pass around wristbands like crazy this year when sales looked slow? It’s packed and more than a few of them are in costumes. Or maybe it’s just the promise of Prince that caused Saturday attendance to skyrocket. Either way, lines are thick at the bar while Portishead wow with ethereal and haunting pseudo-tribal set. Eventually, it’s time for Prince, a.k.a. the guy who saved Coachella’s attendance numbers. Magically, he almost looks tall on the LCD monitors. His set is sort of a variety show, with hype men, guest vocalists, and Sheila E. Interspersing the hits with long jams (and even a Radiohead cover of sorts!), he leads the festivities like an old-time band leader in silver sparkles. Surprisingly, the set is very quiet and I can hardly understand a word that he says between songs. “Little Red Corvette” morphs into a slow jazz love song, someone sings a Sarah McLaughlin cover while Prince changes costumes, and there’s a long version of “Come Together” against the war. It goes on for an hour past the midnight curfew, incurring what I can only imagine to be huge fines that probably seem like nothing in the context of his massive retainer. He comes back out for an encore, serenading us with “Purple Rain” and sending us off with “Let’s Go Crazy”.

Today, I will take that advice to the extent of finding some weird foods before Coachella fades away for another year.

5 thoughts on “dispatch from coachella: saturday”