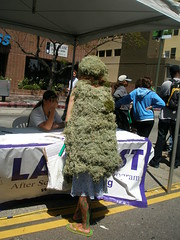 As Burns noted earlier, Wilshire was closed today for Wilshire Center Earth Day, which my family attended (see photos). Our original plans included me and two toddlers taking the train downtown where I had to do some work, then hopping the train over to Wilshire. Those plans fell through due to my husband’s insistence on coming with us and his crazy resistance to public transportation in Los Angeles. So, it was with great irony and much annoyance, that after finishing our work downtown we sat in traffic on 6th street forever and day just to attend the Car Free Earth Day celebration on Wilshire Blvd.

When I heard about this event last week I was a little more than excited about it. Think about it: A street fair with music and a stage on a Tuesday. Brilliant, I say! Worker bees and residents could walk over on a break and we’d be bereft of scenesters.

The entire festival was a lot bigger and a lot more crowded than I expected. There were two stages set up for performances, though we never made it over to the main stage. The booths were 90% educational. The other 10% were split between the typical organic tees with exceedingly lame sayings and the spiritual side; i.e., tarot readers, psychics and vibration/magnetic/crystal specialists. 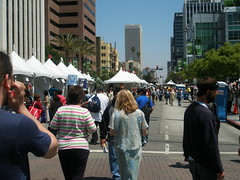 I was pleased to see Plyboo was there showing off their awesome wares. Naturally, there was plenty of information about solar panels, building green, public transportation and water conservation was at the max. MillionTreesLA had their booth, of course, and was giving away 5 gallon jacarandas, “And this time, we’re really gonna water this tree!” was overheard several times as people walked waddled away with their new trees. As long as they’re aren’t wasting water…

The biggest shock of the entire event was the severe lack of food available. What is a street fair in Los Angeles without the lemonade, jerk chicken or Filipino food booths? There was Green Truck, which killed me considering the whole taco truck brouhaha going on right now. But I’m a practicing carnivore and tofu wraps were not in my future…at least according to the psychic.

The event was billed as Wilshre Center’s “first annual” street fair. My only suggestions for next year would be more food, get a farmer’s market going at the same time and try to get the vendors to use less paper.