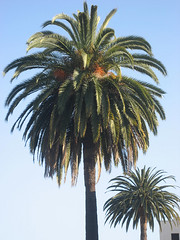 This afternoon I visited the third circle of hell: Petco. The crazy thing is that I don’t even have a pet (stupid landlord), I was just there to pick up some rocks. Putting aside my feelings of utter betrayal by the universe that I paid for some rocks, the visit was totally excruciating. Because the people? Sucked. The store was very crowded and people went out of their way to get in my way. Employees, my fellow shoppers, everyone. Also the line went halfway through the store and moved very slowly. I finally paid my $4.32 and convinced the clerk that I did not want a bag for my bag of rocks (honestly, that is more stupid than putting a bottled beer into a glass), and I retreated from the store for what I hope will be forever. At least until I am overcome with the urge to get a betta.

From Petco I drove across La Brea and parked at Trader Joe’s. It was also extremely busy, so much so that the aisles were deadlocked in places and food was emptying off the shelves faster than employees could restock it. But instead of pushing, shoving, and standing in the way, people were laughing and smiling and being marvelously friendly. A tall fellow (not an employee) saw me looking distraught and got the soy milk from the back of the top shelf for me. People moved their carts to the side. And the lines moved as quickly as is possible, with more opening up while I waited.

(The photo, of a Palm in my Koreatown neighborhood, is totally irrelevant but I thought it was kinda pretty.)