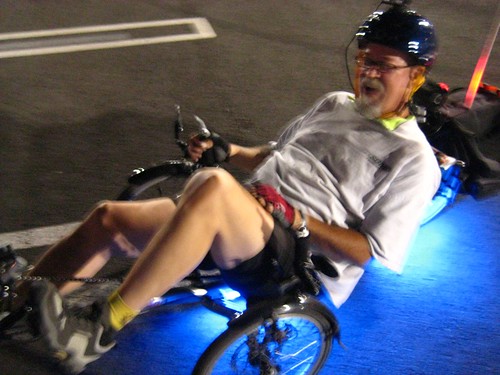 Last night’s Midnight Ridazz was a moving experience — literally and figuratively — done in celebration of one Mark Nealey, a well-known and much-appreciated participant whose nom du gearz was “Glo Rider” and who sadly succumbed to cancer March 15, at the age of 52. Mark was known not just for the distinctively illuminated and unique recumbent trike he rode (as seen in the snap at right that I got of him last July), but also for being a frequent and enthusiastic Ridazz documentarian.

So when the dismaying news of his passing made its way across the biking community, it was rightly decided that last night’s “The Glo Ride” would be done in tribute to Mark. I’m sure the 99-cents stores in the area are wondering why their stocks of light sticks and necklaces and such were so quickly depleted, and the answer was found in many of the roughly 500 riders who illuminated themselves and their bikes to honor Mark.

As usual, I took a buncha pix along the 18-mile route, but my favorite is the following one that I snapped at our stop at at Riverside and Los Feliz of a daring and drenched soul who water be damned scaled the Mulholland Fountain with his bike to the cheers of the rest of us (click to triplify):

Rest and ride in peace, Mark.

4 thoughts on “Midnight Ridazz: All My Friends Know The Glo Rider”