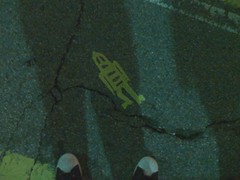 Coming home by train from a lovely viewing of Doomsday at Universal City Walk this evening I saw something I’ve somehow managed near 10 years in LA without seeing first hand and in person. Police tape and chalk lines. Sure I’ve seen after the fact clean up, but this seemed incredibly recent. Basically the entire northbound side of the Hollywood and Highland Redline stop was tapped off. This seemed a little weird as no train was there and my first instinct was just that it was caution tape and some repairs were going on. I was on the train heading south and got to stare at it for 30 seconds or so while the doors were open as we passed through the station. At some point I realized it was crime scene tape and not simply “keep out” stuff, and I looked down and started seeing circles of white chalk all over the platform. Small circles mostly, and then a much larger person sized on near a bench. That’s when the doors closed and we pulled out of the station. My skills must be getting rusty because I didn’t even think to take a phonecam shot until we were in motion (here’s one I snapped later in the evening which has absolutely no relation at all). Scanned the news when I got home to try and see if there was any info and found nothing, anyone else hear anything?