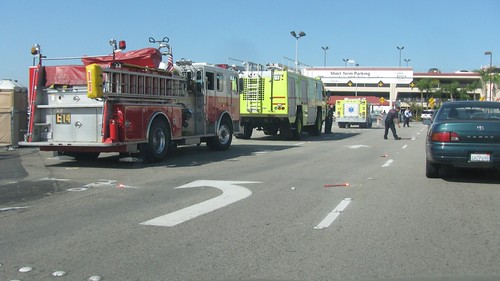 Yesterday morning I went to Burbank’s Bob Hope Airport to pick up some friends visiting for the weekend and rather than being greeted by the usual crowd-free easily accessible awesomeness that makes BHA such a dream, I ran smack into the scene above. Access to the short term parking lot was blacked and vehicles from the Fire Department and Sheriff’s Bomb Squad were everwhere. Circling traffic was restricted the lanes closest to the airport and there were tons of uniformed folks standing around doing.. well, nothing it looked like. I was there for about 20 minutes total and circled maybe 5-6 times and the only impression I could get from any of it was the all official folks involved were bored off their asses and annoyed that they were standing around in the sun. Here’s a few more photos but I haven’t seen any news about it online, though admittedly I didn’t look that hard. Combined with the SUV that drove off the parking structure the staff there seems to be having an interesting week!