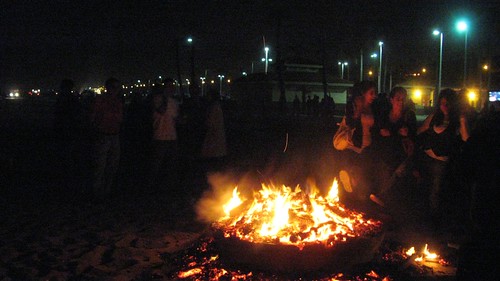 Last night I got invited on a bike ride to Dockweiler Beach where essentually the entire Persian population of Los Angeles was gathered to celebrate Chahārshanbe Sūrī. The whole thing was explained to me and I read the Wikipedia article but I’ll probably still slay the description by simplifying it down to being part of the Iranian new year celebration, a festival of fire in which good wins over bad and you hope it continues to do so for the following year. Anyway there were about a billion people on the beach, jumping over bonfires and blasting music. It was pretty incredible, at least until the beach patrols showed up and over load speakers started saying “ATTENTION! WHEN YOU LEAVE YOU DO NOT NEED TO PUT OUT THE FIRES, JUST LEAVE THEM BURNING AND THE BEACH PATROLS WILL TAKE CARE OF THEM” which no one seemed to understand because they promptly put out the fires and left the beach. Anyway, it was pretty amazing to see and be in the middle of and here are some more photos I snapped.