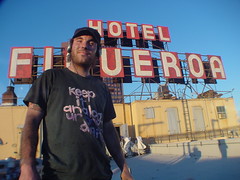 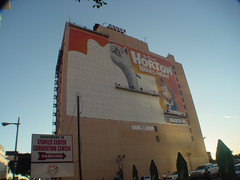 At left is Justin, a mural artist I met after he wrapped up his day hanging from the side of the Hotel Figueroa where he was painting a gigantic ad for Nike, a project he and his crew nicknamed “nightmare” for it complexity, showing “over 120 kids playing over 6 different sports.” You can see the mural in progress at the blog for Art FX Murals, which logs the work of this international crew of “wall dogs” who travel from city to city, painting ads for movies, liquor companies, and other worldwide brands on buildings of all shapes and sizes (mostly in the stomach wrenching tall variety).

The image at right is of the opposite side of the Hotel Fig, where the other half of the crew was rushing to finish work on an ad for Horton Hears a Who.

The project manager, Shane, told me that between the two simultaneous projects the company had more employees in one place at one time – which meant a lot to him because he grew up in the family owned business. I was surprised when he also told me that, in spite of a job relying on a couple winches and cables to keep the workers from dropping hundreds of feet, they’d never had an accident (these things do happen, though). 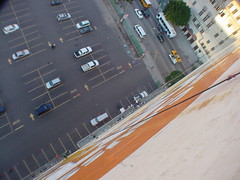 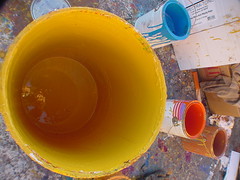 Full disclosure: I was on hand to catch some video footage of the murals being made for work. When I arrived, Shane invited me to take hang out with one of their painters in the hanging scaffold. I was very tempted, but I’d have had to stay in the cart for four hours… and one look over the edge of the 12 story tall Hotel Fig, I was entirely sure I didn’t have the time.

One thought on “Walldogs paint up downtown”