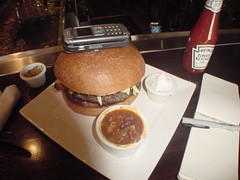 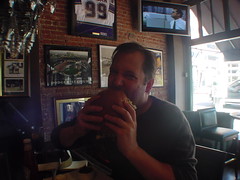 The “Mayor’s Burger” is more than 6″ in diameter (I measured – cell phone for illustration purposes only), and requires an average human to unlock their jaw to get their teeth around.

The image of L.A. Mayor Richard Riordan that is stamped in my memory comes from the 1998 hunger strike by gardeners protesting a proposed ban on gas fueled leaf blowers. At a meeting five days after the strike began, Riordan showed up eating, in full view of the hungry gardeners, a burger from Bob’s Big Boy.

And then today, nearly ten years later, I found myself ordering a $20, one pound burger “Mayor’s Burger” from Riordan’s Tavern on Figueroa in downtown L.A. Like the more affordable Pantry next door, both are owned by the former Mayor.

Guilt aside, I was less impressed with the price tag ($21.50, to be exact), than the dare of a full pound of meat. After confirming with the bartender that it wasn’t coming from any of the recently recalled beef, I ordered the burger medium rare.

Riordan’s itself is pleasant enough. A mid to upper scale Irish restaurant with wooden furnishings, a couple HD TVs showing sports, and photos of the former Mayor hanging on the walls beside some sports memorabalia – photos of Riordan playing golf with Bill Clinton, his name on a #99 jersey for the L.A. Kings, a pair of Shaq’s signed sneakers. In the men’s room, the day’s sports pages from the Times hang on the wall for easy reading.

But the burger… freakin’ giant. I even asked for a ruler, a request the bartender didn’t even blink at. He did suggest I cut the burger in half though, but I declined – I wanted to see if I could lift a burger of such magnitude.

The meat was juicy, tasty, and fresh – perfect, as I hate seasoned meat. Along with fresh lettuce, onion, Heinz ketchup, and a deli mustard of unknown variety, the burger wasn’t of any sort of gourmet variety worthy of words from a gastronomic glossary – just solid, good stuff.

The $20 became justified when the manager walked up and asked if I’d finished the whole thing. I told him I was taking half home with me, and he nodded, letting me know most people will share it between, two, three, or even four guys. Heck, maybe a few starving gardeners. 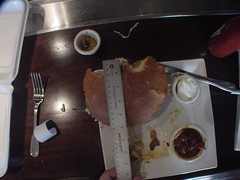 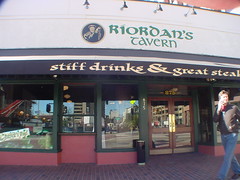 Left: I was barely able to finish half of the burger, even with a full appetite. Right: Riordan’s entry.

UPDATE (2/27 1:41am): I just microwaved a portion of the leftover burger for a late night snack – one minute on high. Better than White Castle!