— With absolutely no apologies to Clement Clarke Moore. 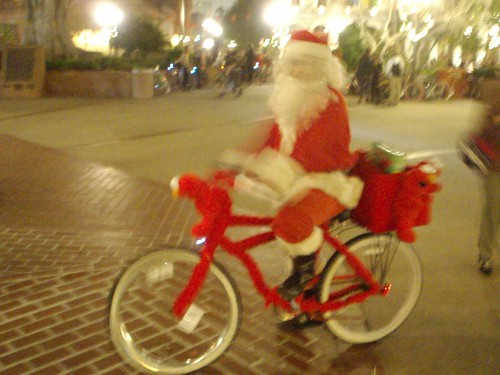 The 2nd Annual Midnight Ridazz All-City Toy Ride rolls tonight, and when Midnight Ridazz says “All City” that’s exactly what they mean. Groups of cyclists from across all socio-econo-geographic planes and psycho-sexual boundaries, each bearing an unwrapped gift valued between $5 and $25, will set out tonight from all over the place — the San Fernando Valley, Northeast Los Angeles, the San Gabriel Valley, East Hollywood, West Los Angeles, South Los Angeles and Long Beach — to converge upon the plaza at Olvera Street and then proceed at approximately 10:30 p.m. along the final three miles to the ride’s East Los Angeles destination where said gifts will be collected for distribution to needy kids and the partying will commence with beer, music, dancing, a full-contact backgammon contest, bobbing for Joose, and other general and specific mayhem to be named later.

Above photo from last year’s innaugural All-City Toy Ride. My Flickr photoset can be viewed here. So far no confirmation if Jason Lee will be in attendance again this year.