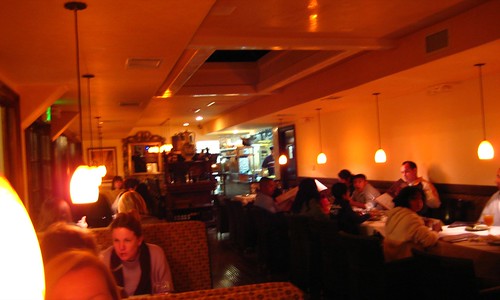 Locals hearing about El Caserio being a new restaurant in the East Hollywood/Silver Lake/Echo Park/Hi-Fi region aren’t wrong to toss out a quick WTF since there’s long been an El Caserio serving up Ecuadoran eats at 309 N. Virgil. But around the bend from that place is now a brand spanking new second El Caserio on Silver Lake Boulevard just north of the 101 Freeway, which opened up just last month after reportedly being upwards of five years in the making by the owners of the original.

Having not been to the one on Virgil I can’t offer a comparison between the two locations other than to say the older is situated in a strip mall north of Temple and the newer is something of an oasis that’s by all means a welcome upscale addition to a rather downscale area. From the perspective of menus whereas the first seems to stick mainly to Ecuadoran items, the second is focusing more on a fusion of cuisines from South America and Italy.

With its appealing exterior and warm, welcoming interior it’s clear the owners are aiming high. Inside the space is nicely decorated and well thought out. There’s a small bar (with requisite wall-mounted flat-panel TV) to the left of the entrance and past that the main dining area stretches down to the open kitchen with four-top booths down one wall and two-top tables down the other. French doors lead to an expansive patio that while deserted due to the wintry weather Saturday night will no doubt be hopping in warmer times and climes.

After the jump: Would you like a little broken glass with your calimari?

Upon being seated my wife Susan and I ordered up caipirinhas, the Brazilian equivalent of unblended daiquiris made with lime juice, sugar and the rum-like cachaca — tart and tasty! — and for a starter we opted for the fried calamari ($11). If the price seems a bit high, it’s proportional to the vast plate of the stuff that arrived. Unfortunately I’m not able to report on how it tasted because its appearance at our table also brought about a flub from which our decidedly amateur server was never able to completely recover — though not for lack of trying. Or apologizing.

Without asking Susan or me if we might want wine with our main courses to come (Tablewaiting 101) she set down the calimari and reached across us to remove our glasses. In doing so rather hastily she somehow managed to shatter mine against the light fixture above the table. Though all of us were able to avoid getting hit by any flying shards, our appetizer beneath the impact zone wasn’t so lucky and with a shower of sorrys the server wisely took it away to be replaced. Accept that instead of being replaced the server brought our entrees out next, leaving us telling her we no longer want the calimari and the server not quite understanding why bringing a starter as a finisher might not be ideal. So then the hostess shows up with more apologies and says the calimari is on its way and again we shrug and say it’s a little late for that and she too shrugs leaving it unclear whether we’re going to get it or not, but we decided not to argue if we do. Ultimately we don’t.

And we didn’t need it what with the ample portions before us. My Lengua en Salsa (braised beef tongue with tomatoes, onions, carrots and peas; $16) and Susan’s Halibut al Caserio (broiled with tricolor sauce rice and plantains; $22) were both excellent. Tender and very flavorful. We also shared a side order of tasty llapingachos (cheese-topped potato cakes; $8). For dessert we had rich cups of a South American version of cafe au lait ($3) and shared a lemon pana ($5).

While I could make the moral of this story be “never underestimate the power of a good (or bad) server,” I’m not going to end it there. Certainly a more experienced person would have found me receptive toward a glass of wine (thus no broken glass) or at the very least would have seen me twirling the leftover ice in my first caipirinha and sold me a second cocktail. But despite the inattention to detail and the dramedy of errors and communication issues we encountered, El Caserio has a good heart and a good vibe and a good space and good food, and I’m more hopeful that this new kid can work out the kinks and grow into its potential.