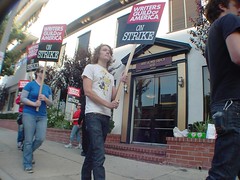 Today I swung by Sunset Gower, where the numbers were lighter, but the strikers more aggressive, than yesterday’s picket line at CBS Radford.

At the front entrance, a bullhorn was passed around like a hot potato where each handler tried unsuccessfully to start a chant, such as “Big producers, you’re the Scrooge; Nicholas Counter is just a stooge.” Any vehicle that attempted to enter was given a little bit of a hassle before the picketers made space for entry. Rick Dee’s sedan limo was stopped at the entrance and surrounded (see pics below), but in spite of verbally committing support he still had the driver pull onto the lot. A flower delivery guy wasn’t given much resistance, but his claim, “I’m a playwright – I feel you!” was met only with moans.

However, support from honking cars passing by was non-stop – even a fire engine slowed down to blow its horn.

A small squad of protesters stationed at a parking lot entrance down a side street seemed a little more lax, telling me that one guy they allowed in without a problem was their inside man. Noticing the guys here were mainly WGA members on the “Heroes” staff, I asked if they’d considered trying to get their fan base to come out and picket with them. “We respect them too much,” was the response.

I called my buddy Phil, who works a bit as a SAG extra, and he said he’d heard that the WGA was paying some extras $50 to walk the picket line (I haven’t been able to confirm this). He also felt a bit conflicted – he’s struggling to pay rent as is, and isn’t sure if he should still go on the set of a series he was called into a couple weeks ago.

Apologies for the dry report… pics after the jump. 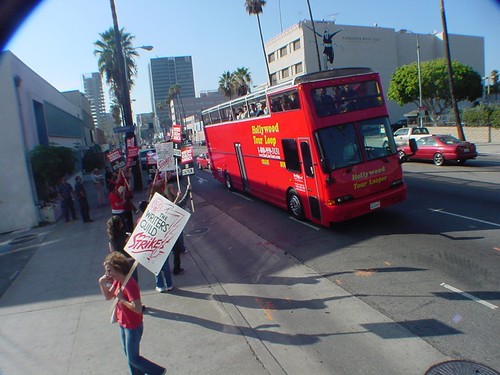 Tour buses are in for a treat this week. The writers have been let out of their cages! 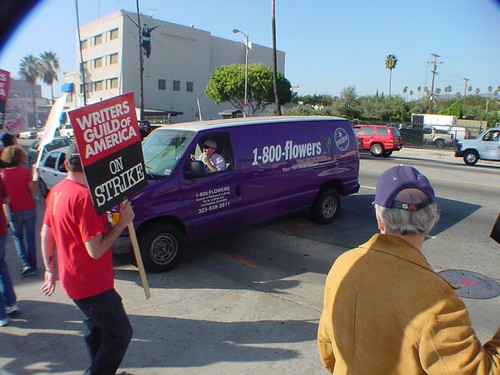 Flower delivery guy-playwright. Yet another hyphenate. 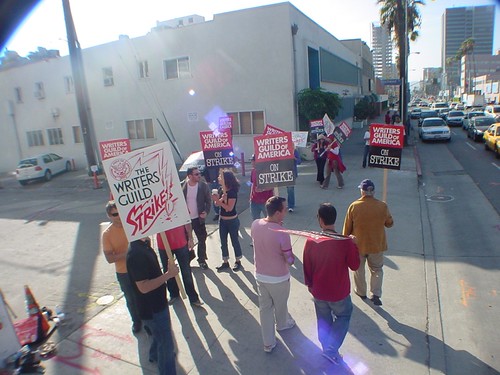 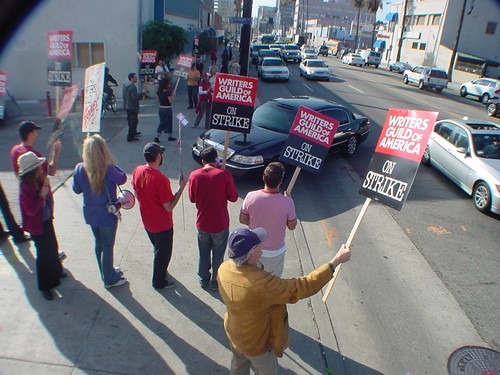 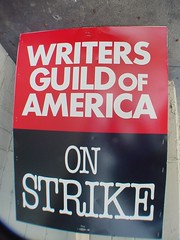 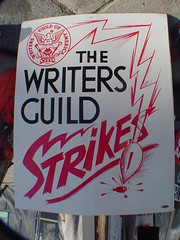