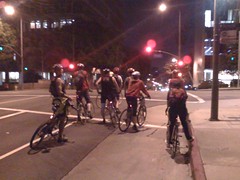 There are an endless amount of theories on this topic that are discussed, at great length, during almost every time you get more than 2-3 cyclists together. Legally, here in the US (and likewise in CA) bicycles are the same under the law as cars, meaning they get the same benefits (full use of the lane, etc ) and must obey all the same laws (stop at reds, etc). On bike, more so than in a car, sometimes safety trumps legality and when you take “the law” out of the picture it changes very rapidly – with opinions on what is actually the safest practice shifting from biker to biker.

If you don’t ride a bike the thought of running red lights might sound like something that couldn’t possibly be safe but in fact there are many situations where keeping a group of riders together or not stopping faster than the car behind you are very important things to consider. The Wall Street Journal just pointed me to this conversation on streetsblog where there is more than just random opinions being thrown around. Alex Marshall makes the case that the laws were only written for cars and should only apply to them. He actually argues that forcing non-motorized vehicles to play by the same rules is unsafe for everyone, but he isn’t suggesting all out anarchy. He writes:

“It could be understood that a red light is there to control the car or truck, not everyone else. There are a number of options. What Montreal does on some streets is to let cyclists proceed six seconds before the cars do at some red lights. This frees cyclists from being lost in a swirl of drivers going around them. In many Dutch cities, drivers are bound by one way streets, but not cyclists. Imagine such a thing here. “

The conclusion he comes to is that a car is a very different vehicle than a bike, and behaves differently in every aspect so the rules for one should not apply to the other. It’s not a new idea, nor one that isn’t discussed frequently. What do you think, laws aside, should cyclists respect the reds or use them as advisory only?

17 thoughts on “Respect the Reds? On bike, is it safer to run red lights?”