One of the great innovators of the silent film era whose comic genius and remarkable body of work continues to resonate and influence and find new fans, Joseph Frank Keaton was literally born into show business October 4, 1895. No fooling: his vaudevillian parents Joe and Myra Keaton with partner Harry Houdini owned a traveling show called the “Mohawk Indian Medicine Company” that was touring the midwest at the time, and it is the small Kansas town of Piqua that can lay claim as Buster’s birthplace basically because that’s where Myra went into labor.

Popular legend has it that his nickname was bestowed by Houdini himself who prior to a performance observed a very young Keaton accidentally trip and fall hard down a flight of stairs. Upon rising quietly with a broken and bloodied nose, Houdini is alleged to have said to Myra “That’s quite the little buster,” and it stuck. By the time he was 3 he was performing with mom and dad.

Famous for his expressionless expression in the midst of any calamity or conundrum, the New York Times once wrote of him: “In a film world that exaggerated everything, and in which every emotion was dramatized and elaborated, he remained impassive and solemn, his poker-faced inscrutability suppressing all emotion.” It was a mannerism derived from the intensely physical comedy sketches young Buster and his father and mother would perform together at the turn of the century as “The Three Keatons.” With Myra playing saxophone at one side of the stage, the act consisted of Buster goading his father by disobeying him until Joe would respond by throwing him into anything and everything: the scenery, the orchestra pit — even the audience. The act evolved and grew in popularity as Keaton mastered the acrobatic art of trick falls and subsequently discovered the dangerous stunts drew greater audience reaction when he himself showed none. Thus his signature deadpan look was born and a star was soon on the rise.

After the jump Hollywood falls for Keaton who then falls from grace.

After serving in World War I, Keaton’s return to vaudeville stages soon saw a transition to film production that came about when he met Roscoe “Fatty” Arbuckle in 1917. Resolving his existing disapproval of motion pictures Keaton made his first screen appearance that same year in The Butcher Boy starring Arbuckle (see upcoming screening info at end). The two became close friends and made a string of well-received shorts. Following the formation of his own production unit called Buster Keaton Comedies under mogul Joseph M. Schenck, he delivered a set of two-reeler comedies between 1920-22 whose success moved him into full-length features, the most enduring of which began with Our Hospitality in 1923 and ended with The General in 1927.

Written, codirected and starring Keaton as Johnny Gray, The General was set during the Civil War and featured elaborate location shoots, epic chases, clever visual gags, dangerous stunts and technical trickery that mark it now as his finest achievement and one of the greatest motion pictures in history. But at the time of its release critical disapproval essentially turned audiences away and it became a big-budget box office dud that ultimately resulted in Keaton’s loss of creative independence. For his next two films he was saddled with a production manager appointed by distributor United Artists, who tallied expenses and tinkered with scripts and forced him in 1928 to jump ship to Metro-Goldwyn-Mayer.

But things weren’t so great under the thumb of Greatest Dead Angeleno #12 Louis B. Mayer. Realizing too late that the studio system would be even more creatively constricting, it was a decision he would come to call the worst he’d ever made. Forced by MGM to use a stunt double for the first time, he stopped directing but his star continued to shine as a performer in pictures that included a popular series paired with Jimmy Durante. But with the establishment of talkies and growing personal turmoil Keaton’s greatest cinematic achievements were behind him.

His first marriage to actress Natalie Talmadge, which had begun to disintegrate in the mid-1920s after the birth of their second son, finally ended in a bitter 1932 divorce in which he lost his fortune and contact with his boys. This led to severe alcoholism for which he was institutionalized in 1933. That same year he married his nurse, Mae Scriven, only to divorce her three years later, again at great cost. Then in 1940 he met and married Eleanor Norris, 23 years his junior. She is credited with saving his life by stopping his heavy drinking and helping salvage his career, and they remained together for the rest of his life.

Throughout the 1940s Keaton played character roles in a variety of films. “Rediscovered” in 1949 he had a successful television series in 1950 with The Buster Keaton Show and guest-starred in films like Sunset Boulevard, and Around the World in 80 Days. His final film appearance can be found in 1966’s musical comedy A Funny Thing Happened on the Way to the Forum, and thank goodness for that because otherwise his last role would have been in Annette & Frankie’s final beach blanket sex farce, 1965’s How to Stuff a Wild Bikini.

Keaton died at the age of 69 70 in Woodland Hills of cancer on February 1, 1966 and is buried at Forest Lawn Hollywood Hills. His grave is marked by a simple plaque embedded in the grass that reads Buster Keaton 1895-1966. Eleanor who for the rest of her life worked tirelessly on behalf of her husband’s legacy, died in 1998. He has two stars along Hollywood’s Walk of Fame, one for film and one for television (respectively at 6619 and and 6321 Hollywood Boulevard). In 1994 his image appeared on a postage stamp designed by famed caricaturist Al Hirschfeld. But by far his most personal and historic local landmark can be found at 1018 Pamela Way in Beverly Hills in the form of the 10,000-square-foot “Italian Villa” whose design and construction he was heavily involved in. Built for the extravagant sum of $300,000 in 1926 at the height of his popularity, Keaton sold it during the divorce from his first wife in 1932. Subsequent owners included Barbara Hutton and Cary Grant, and later British actor James Mason, whose daughter, Portland, turned down higher offers in 1999 from developers intent on razing the declining property and instead sold it to a local real estate team intent on preserving the distinctive residence’s cultural heritage.

AFTERWORD
Not in the interest of disclosure so much as a rambling epilogue do I admit having something of a familial connection with the great Buster Keaton. In actuality it’s really weak — more of a step-familial tie being that my stepfather was good friends with the legend during his later years. Indeed, Buster and his wife Eleanor were regular guests in my stepdad’s Sherman Oaks home for parties and card games in the 1950s up to his death two years after I was born.

My stepdad loved Buster, but there was little love lost between me and my stepdad. A bellowing pitiable drunk, he gave my mom and me mostly grief in the four years the two were married before he himself shuffled off in 1988. But I will credit him with instilling in me an appreciation for Buster Keaton’s unique genius. Giving me nothing in death, I went ahead and helped myself to something of a decidedly odd yet distinctly unique piece of memorabilia that Buster had been given: a game ball from the 1932 Rose Bowl presented to him by the USC Trojans after beating undefeated Tulane 21-12 to claim the title of 1931 National Champions. I know this because though the 75-year-old pigskin is darkened and stained and cracked and the players’ and coaches’ signatures are barely decipherable, a hand-drawn USC pennant proudly waves in the panel below the inscription, which reads: 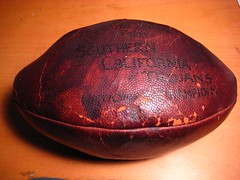 I’m entirely unclear as to what prompted USC to bestow such a treasure on Keaton. And whether Keaton parted with it as a token of his esteem for my stepdad or maybe just to cover a poker debt I do not know either. All I know is that despite its poor condition from too many years of neglect I’m honored to be the keeper of such a one-of-a-kind memento (small Flickr photset here) from one of my favorite film stars at a time when the pioneer shined bright enough to forever be one of the greatest.

Upcoming Event: Keaton’s first filmThe Butcher Boy, and another early one titled Coney Island will be two of several scheduled to be screened during the Fatty Arbuckle Shorts Matinee at the Silent Movie Theater (611 N. Fairfax Avenue, 90036), November 18 at 4 p.m. Tickets are $12.