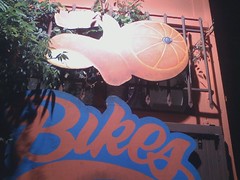 I’ve been riding the same bike for the last 8 years, and bought it as a replacement to the one I had for another 5 before that when it was stolen. It’s a great bike but the more I rode it around the streets of Los Angeles I realized it was really designed and better suited for the kind of off road mountain biking I used to do much more of some 13 years ago. Once I realized this there was no going back and I started looking at getting something a little more city street friendly. Buying a bike was something I wanted to make sure I did right, I didn’t want to spend a chunk of cash on something only to find it’s not the right thing for me.

After checking out a few shops around town I decided that Orange 20 Bikes would be where I bought it because it’s a small shop with strong connections to the LA biking culture, and more importantly the guys there were extremely helpful when I went in with questions. Their hours are a bit sporadic which makes getting in there to talk to someone the hardest part but once I did TJ (and later Jim) were more helpful than I could have hoped. I bought a complete bike but swapped out a few parts (here’s the final results) to make it more “mine” as well as to upgrade a few of the key components to something a little more street worthy. Though all of this the guys there offered helpful, frank advice (such as pointing out that X brnad was more expense than Y brand and the only difference in quality was the color of paint, or that a specific piece on the stock bike was known to fail pretty quickly and they could replace it right away with a much higher quality piece for about $4). I never once felt like I was being upsold or that I was being pushed towards something I didn’t want. It was an awesome experience and I can’t recommend them enough. (not to mention that they are conveniently located on Heliotrope at Melrose, right across from The Bicycle Kitchen and Scoops, and directly next door to Pure Luck!)