This is your last chance this summer to get out on a true cetacean safari in Santa Barbara with the American Cetacean Society. On Saturday, August 11th is the ACS-LA’s annual “Blues of Summer” cruise. I went two weeks ago and can I just say awesome? Three blue whales (we stayed with a pair for nearly an hour). We saw four different pods of dolphins (including one huge pod of 500 or so short-beaked common dolphins), a mola mola and my first-ever sighting of a basking shark.

Okay, the video is a little choppy, but photos just don’t begin to show the scale of these 80 foot creatures.

Blue Whales are being spotted up and down the southern coast of California right now, there are boats that go out from Dana Point and even San Diego. But of course I’m fond of the Condor Express voyages because it’s such a nice boat (wide and stable as well as being fast).

Here’s a set I found of another SoCal person who went out on Sunday from SB and saw blue whales.

WHERE: Santa Barbara Harbor on the Condor Express. Cost: $90 ($80 for ACS members)

We’ll board the 75-foot Condor Express in Santa Barbara Harbor for a full day excursion, heading out toward Santa Rosa and Santa Cruz Islands, 20 miles offshore.

Explore the Santa Barbara Channel, one of the most prolific whale watching locations in the world. Discover the endangered blue whales as they gorge themselves on schools of krill. Experienced naturalists will be aboard to narrate the trip and answer questions. The 75-foot, jet-powered Condor Express departs from SEA Landing in Santa Barbara. 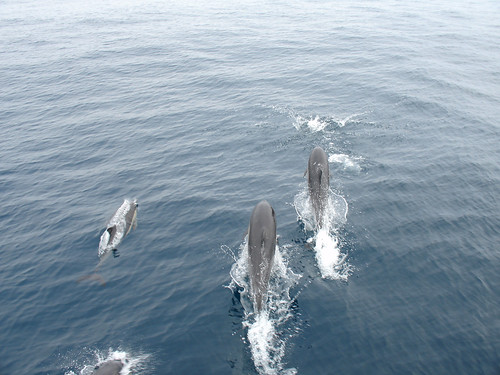