One of the many things that confused me about Los Angeles when I first moved here is the Pioneer Chicken. 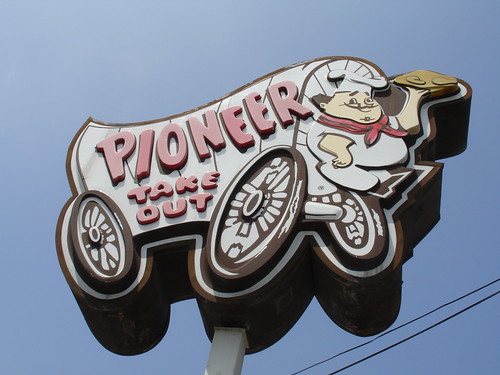 I’ve stared at them a lot, they’ve been along most of my commutes for the past 15 years, so you can imagine how much time I’ve spent at intersections during red lights just staring at the sign.

But I’ve never been in one.

It’s the sign … it completely confuses me. What is it? It’s a chuckwagon … but the guy on the wagon isn’t old “Cookie”, he looks like a sterotypical Italian chef, kind of like Luigi Risotto from The Simpsons: bald-headed, tall-white-hat-wearing, mustachioed, scarfed and pot-bellied.

But wait, Luigi Risotto is selling pizza … Pioneer Pete is selling … um, well, fried chicken and hot dogs and fish & chips and taquitos and pastrami and who knows what else. (Fast food places that advertise pastrami have always confused me, I understand that it’s LA’s lack of delis that forces pastrami into fast food joints.)

Pioneer Chicken outlets are all but gone. Only five remain in the Los Angeles area where there were once over 80. A switch by the franchisees to Popeye’s gobbled up most locations, except for five that still hobble along untouched by time, fads and rational motifs (two on Sunset). The original is just off Sunset in Echo Park next to the old Pioneer Market (now a Walgreen’s).

I’ve prowled around on Chowhound and found a few threads about the actual food that they serve. It sounds pretty good (and looks pretty good from this commerical I found on YouTube). Maybe I need to stop being such a baby and just go in and try it.

Anyone want to testify to their fried chicken brilliance or congratulate me for being Pioneer Chicken clean?

11 thoughts on “Pioneer Chicken … a wagon full of confusion”