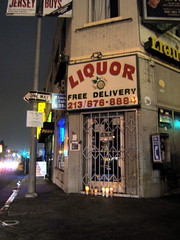 This past Thursday, July 19th at about 6:30pm a botched hold up resulted in two liquor store employees being shot, one fatally, at the Lime Lite Liquor Store just steps south of Hollywood Blvd. on La Brea.

Yesterday police released the surveillance videos to the media which show an unquestionably cold blooded killer at work. In the footage you can clearly see the would be robber hold a handgun to the head of one employee, identified as Pulod Davlatnazarov, 39, just before shooting another store clerk Vladimir Akkerman, 69 at point blank range in the stomach – apparently for setting off a silent alarm. Seconds later, police say, off screen the robber shot Davlatnazarov in the head, and ran off empty handed.

Davlatnazarov died at the scene. A student at LA City College, he had emigrated to the United States 9 months ago from Uzbekistan, where his wife and daughter reside. Akkerman is hospitalized, but is expected to recover.

The suspect was described as a black man about 18-22 years old, 5 feet 6 inches tall and 180 pounds. He had a short Afro haircut and wore wire-rim prescription eyeglasses.

Anyone with information about the case was urged can call LAPD detectives Vicki Bynum or Larry Cameron at (213) 972-2910, or the toll-free number (877) LAW-FULL.

The man can be seen relatively clearly in the video available via CBS 2 and KNBC4 – if you live, work, or frequent the neighborhood, I encourage you to take a look.

On many days, I’ll be passing by this same liquor store on my way home from a few hours writing at the coffee shop down the street. Instead, I was actually hiking up in Runyon Canyon, and took notice of a number of helicopters and even the Goodyear Blimp hovering above the intersection. It was only until 11pm that night, when I turned on the news to see a live chopper shot of the storefront on TV, did I know what happened.

I walked down to scene late last night and found a small makeshift memorial for the victims. Some photos from the scene: 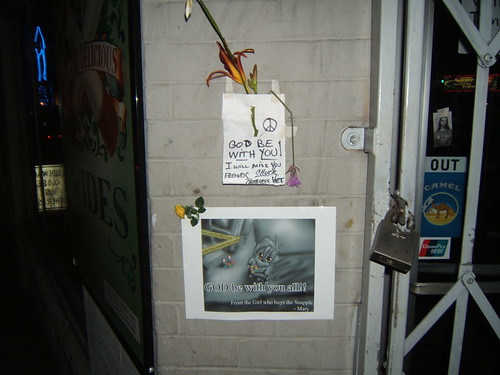 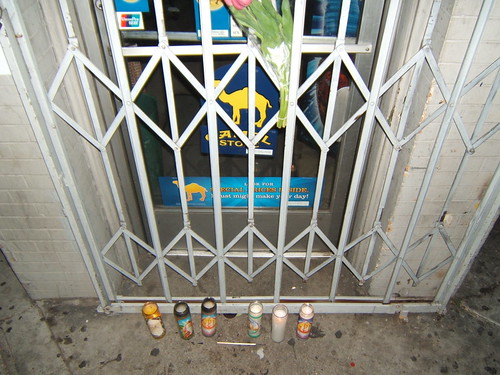 4 thoughts on “Robbery/Homicide in Hollywood”