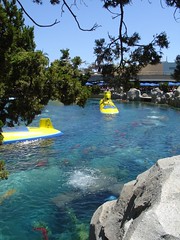 I haven’t been to Disneyland a lot. I went back in the early eighties with a cousin while I was in Anaheim for a wedding, I went in ’93 when they opened Toon Town because a friend designed it and we wanted to see the new “land”. That was the first and last time I rode the Submarine Voyage attraction. I found it headache inducing and lame … it smelled of diesel and the attraction was bleached and faded. Of course it was closed a few years later and then sat as a mere pond until earlier this year when Finding Nemo opened.

I went to Disneyland with my brother and his family (an eight year old nephew and six year old niece and my sister in law) and we were rather surprised to find that the Nemo ride was not only popular, but they were also filming a commercial for it, so there was the usual, oh, two hour line plus a bunch of disclaimers posted that by entering the area or riding the ride we agreed to be in a commercial with no further compensation. Oh, and they’ll be stopping and starting the ride. So if you’re curious about whether you should wait in line for this … read on. 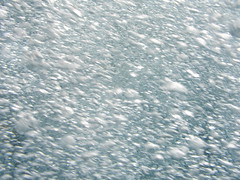 We waited until the afternoon, as the cast member at the end of the line suggested. While it cut the wait time from two hours to an hour and twenty, it also meant that it was the hottest part of the day. At two I got into the line for the whole family. The only interesting part about standing in line was timing how long the boats took to go around (close to ten minutes) and the trio of gulls on a buoy that would screech, “Mine, mine, mine!” every once in a while. Once at the head of the line I called them on the cell and they joined me at the spot where they park folks’ baby buggies. So far so good!

The subs themselves are interesting. Only those who are mobile are able to ride, as you have to go down some pretty narrow steps and sit on some teensy seats (but really, Disneyland isn’t for the wide bottomed, is it?). They hold about thirty people, and they’re loaded from the front and back at the same time, one side for each entrance. 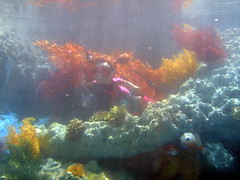 Once everyone is in, the “story” starts. The sub goes along its little track and the voice over tells us we’re going to look for an undersea volcano. Immediately in the coral reef we see Darla, the kid with braces in Finding Nemo, diving in the reef and catching fish for her aquarium. There are a few fake fish dotting the fake seascape. Then the sub encounters a “lost civilization” marked by large stone blocks and moai (stone statues of Easter Island). The “crew” announces there’s a storm and we need to dive deeper … more bubbles.

Then the sub goes into the fully themed environment. This part of the ride uses layers of real elements and projected parts of film (with audio). It’s explained that they have “hydrophones that can translate the fish”. 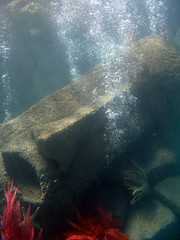 Then it follows clips of the movie for a while. There’s a point where the sharks from the movie set off some old mines and the sub loses power (goes dark). The coolest part is the segment when Dorie and Marlin encounter the jellyfish. The jellyfish are electrified and glow in the dark … pretty cool. Then sub is somehow swallowed by a whale (this also happens in the Storyland ride, which has virtually no line). I dunno, I think I lost interest at that point and was trying to figure out how many passengers there are or something. Then the rides over and we climb out!

Now, things you should know about me … I wasn’t really that thrilled with a lot of the rides. However, if I were a kid who had watched Finding Nemo until I wore out the DVD, this might be passable fun. But not if the wait is more than 45 minutes (and hopefully it’ll be in the fastpass system soon). There are a lot of things to like about Disneyland, not the price of course. The “cast members” really are exceptional, the place is clean and the parades and fireworks are fabulous. (And I ate a lot of candy.)