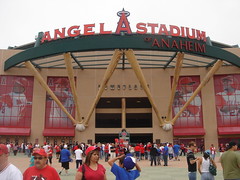 I live in LA. I love LA. But I grew up in Orange County.

And growing up in the OC means that I’m an Angels fan. So is my whole family. In 2002 when the Angels won the Series, our whole family — Aunts, Grandmas, girl friends, pets — we all wore Championship T-Shirts to Thanksgiving to take pictures for a family calendar.

So today was the final game in the Freeway Series, and it’s pretty clear who’s playing the best baseball in SoCal.

Sweep this series and took the preseason match-up 2-1.

It was a fun game to attend. I went with my Dad and we sat way up high between 3rd and Home. There were a ton of trash talking Dodger fans in our section.

What happens when you choke? You turn Dodger Blue. :P

Anywho, interesting developments since I went to a game last season. The Angels now sell commercials on the Jumbotron, not ust the lame contests that are sponsored, but actual commercials for DVDs, etc that took over the big screen and the PA.

And the were outages of Nacho Cheese and Hot Dogs at the concessions stands. WTF?

I’m going to a Dodger game (traitor I know) in a few months, I haven’t been there since I was a kid. What should I expect? (And yes I’ll root for the Dodgers when I go.)

Here’s more photos I took from the game here.