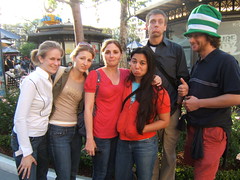 At right, a gang of pillow fighters disappointed after planned battle was stopped by “the man”. Video to be posted soon.

With security placed at every entrance, along with undercover support throughout, the management of the Grove successfully deterred what could have been a bloody melee of hooligans armed with pillows.

The clock above Abercrombie & Fitch surprisingly began working again at least half an hour before the planned start of the pillow battle, although there was no sight of anyone with a pillow around. I decided to concentrate my attention to the main entry into the Grove from the parking structure, where I could see eight or so levels to walk down from with a clear view of the elevators and escalators. At each level was a security guard – almost every one with a walkie talkie held to his ear.

About ten minutes til 6pm, I finally saw a handful of people with pillows up toward the top, looking defeated. The tallest of the gang was wearing pajamas, making him an easy mark for security. I can only guess that the first guard who saw them told them to either go away, or put the pillows back in their cars.

I walked over back toward the clock above Abercrombie & Fitch, where a security guard walked up to me and asked if he could look in my bag. I curtly said no. He explained that there was supposed to be some sort of a pillow fight, but made no indication that he was going to push the subject. If he had, I would have sternly refused. Instead, I fessed up.

“Yep. There’s a pillow in my bag. But I’m not going to take it out.” I just want to write about the pillow fight. He suggested I put the pillow back in my car. I refused, explaining by the time I walked there and back whatever action might transpire would be over. After some negotiation, I agreed to put it at the concierge desk, and he trusted me with walking out out sight.

On the way to the concierge, I spotted a couple people being grilled by security, who clearly had pillows in their bags. “I’m just here to go shopping” I heard one say.

The concierge told me mine was the only pillow that he’d checked in, and seemed unaware as to what was happening. I quickly ran back to the Abercrombie & Fitch, where, of course, I’d clearly missed some action. A couple crowds were huddled near security guards, pleading their case. When I asked what had happened, one guy said that another dude wearing pajamas had been arrested just for carrying a pillow.

Security was spread out, asking anyone who wasn’t there to shop to go away, that loitering wasn’t allowed. I grabbed a couple interviews with wanna be pillow fighters (to be posted soon) complaining about how irrational the Grove security was. I asked Grove security if there was anyone I could speak to with their side of the story, but was told nobody was on staff who could officially reply, although one undercover guy who said he just happened to be there and decided to help out, said that the Grove was a family place with lots of kids running around, so a pillow fight was inappropriate there.

To be fair, from my perspective the Grove’s security staff were polite and measured, and the one guy in pajamas who was supposedly arrested “for no reason” was apparently asked to leave before sneaking in from another entrance.

Maybe next time, new rules for Pillow Fight Club will include: “Dress discretely to pillow fight club” and “Buy your pillows at the location.”

If anyone has another side to the story, please leave it in the comments, along with links to any additional photos or video from the non-event.

21 thoughts on “The Pillow Fight that never was”