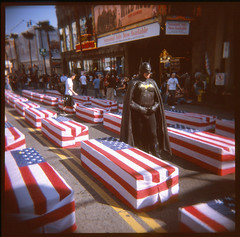 Photo of Batman from last weekend’s war protests in Hollywood by Adam Hawkey.

Someone supposedly “hacked” into Mayor Sam’s Sister City and deleted all of Zuma Dogg’s posts and comments.

The Bottleneck Blog reports that adult bus fares may get jacked up to $2 in 2009, among other increases.

Remember the UCLA psychiatry sex scandal? The comments at Darleeneism’s post on the verdict has turned into a war of the words between the bitter participants. Darleene has followed up by recommending they all just get a blog.

Julia in Mexico City (who’s really in Los Angeles) is impressed by the “fabulousness” of Angelino Heights.

The 1947 Project unveil’s its next stop in the Los Angeles crime blog’s time machine: the “scandalous, jazz age” of 1927.