The Man and I were rather suprised to find a film production fully ensconsed at Rocky Peak Park when we arrived this afternoon. Sure, I pass by productions all the time. In fact, I passed by one on my way back from whale watching this afternoon. Somehow finding on in an area like this seemed a little more noteworthy.

Without much info besides the title of the picture, Lions for Lambs, we went ahead with our hike (taking a different trail because the production occupied the easier one we were hoping to take). On the way back we asked the guard nicely if we could look at the production set up, which was in a bit of a bowl in the rocky hills. He said okay and we were able to climb up the hill to one of the lighting platforms to look in. 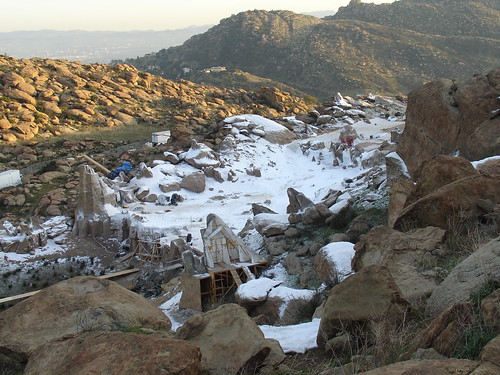 The Man guessed correctly that the location was doubling for Afganistan. More info after the jump about the movie itself. Loads more photos in this set.

While I have expressed my irritation about production interfering with my day to day activities, it appeard that the folks were doing a good job of keeping their production in check and mindful of the location. The trail was clean (though populated with lots of signs like “no smoking”, the guards were cordial and helpful. No one else on the trail seemed put out by them either.

We guessed that they’re already shooting. There are talent trailers there (three small ones and what look like two larger “star-level” trailers. The snow stuff on the rocks and gully was stacked all over the place in palettes and called Snow Business (har har) – which looked like paper fiber.

Lions for Lambs
Directed by Robert Redford
Written by Matthew Michael Carnahan
Starring: Tom Cruise, Meryl Streep, Robert Redford, Peter Berg, Michael Pe√±a, William Mapother, Derek Luke & Andrew Garfield.
In Brief: Simultaneously: 1) a Senator on Capital Hill debates a current crisis in Afghanistan, with the Reporter who made his career … 2) a Professor teaching Political Science tries his best to convince a good student not to give up his studies, using two former students who passionately enlisted in the Army as an example … 3) both of which (coincidentally) are currently under fire in Afghanistan — the very same crisis the Senator and Reporter are debating over.

Here’s where we were.