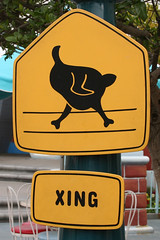 Okay, maybe they’re not taking over. But there’s defintely been an invasion. There are all sorts of urban legends about local birds, the two most popular are the Chickens of the 101 and the Wild Parrots of Temple City and Hollywood. How true are they? Very … it’s not their existence that’s in question, but the stories of their origins are still the stuff of urban legends.

The story of the Chickens of The Hollywood Freeway starts sometime in the late sixties when enough chickens were released on the busy highway to start a sustainable population. Where the chicken settlers came from is a mystery. One of the more likely stories is that a poultry truck overturned and some chickens (including roosters) escaped and took up residence. However, over the years many people have come forward to admit that they also released chickens in the area. (Read more at Snopes.) Stories range from children rescuing pet chickens from a school closing to kids with backyard chickens threatened by neighbors to backyard chickens being chased by a dog. All seem like plausible stories and it’s entirely possible every one of them is true and each of those little bands of chickens joined together in the new colony. 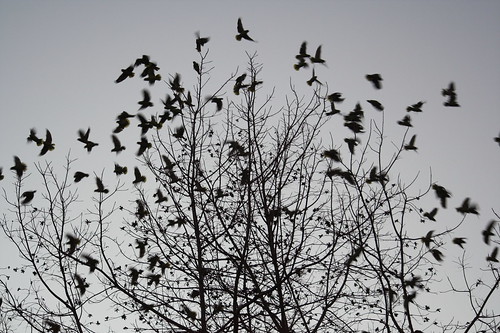 The chickens may have gone feral, but most birdwatchers agree that the Wild Parrots spotted all over SoCal are probably wild. There are at least five flocks of Wild Parrots that have formed breeding populations, the most notable and documented is probably the flock in Temple City but they have been spotted in great numbers in Pasadena, Hollywood, El Segundo, Downtown and isolated sightings just about everywhere in between.

The parrots have done particularly well in the Los Angeles area because of our large number of tropical trees, many of which are indigenous to the areas the parrots are originally from.

As with the chickens, the theories as to how and when the parrots arrived are plentiful. The most widely repeated one is that hundreds of birds escaped from a quarantine aviary at the Port of Los Angeles in 1992 after a brutal storm.

Other stories also include a natural migration of the birds, most from their native Mexico. An estimated 2,600 red-crowned parrots live in the greater Los Angeles area, which with its mild climate and wide array of exotic vegetation is an epicenter for imported birds. Red-crowned parrots are endangered in their native eastern Mexico. (Link)

Quaint stories also appear, the San Gabriel Valley legend says that a pet shop owner relased the birds when his storefront caught on fire in 1959. Though he was saving their lives, he knew full well that he’d never recapture them, but probably never imagined that they’d grow into a breeding population. Part of the Westside population may have gained a population boost as well in 1997 when birds were released from a private aviary during the 1997 Malibu Fires.