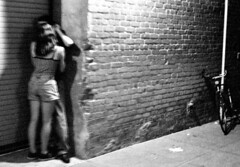 “Sex Scenes” consisted of a quartet of sometimes harder than softcore pornographic tales, which a more refined pervert might call “erotica”. Read by a slate of mostly local actors, the stories almost all involved characters working in or around the film industry, and each focused on a different sexual preference:

A young man has his first homosexual encounter with an A-List actor, who ensures him that giving each other blow jobs “isn’t gay at all.”; Seperated by a plane of glass, a prison inmate has “phone sex” with a sultry visitor who roleplays being a teacher keeping him in detention; a pair of brother movie directors discover their sultry starlet is more than happy to indulge their kink of being furries; an up and coming woman director inadvertently brings out, and entertains, the secret submissive/S&M slave side of a high powered studio exec.

Each piece was a little lengthy, possibly made even more so by the cramped Pleasure Chest setup being less intimate and more, well, cramped. But the evening was filled with enough genuinely great one liners, and surprisingly ballsy performances, that it won me over by the end. Highlights included a sultry Angela Seikman simulating an orgasm that puts Meg Ryan’s to shame, Neil D. Paris as the “not gay” actor giving instructions to Trane West on how to give him a blow job, and Dan Bargier in assorted roles that all felt perfectly miscast (his “The Dude”-like persona performing as a wisely sexual sage).

After the show, writer Polly Frost explained that she wanted to make these open meetings more of a regular engagement in Los Angeles, as they’ve been back at her home in New York City (she’d just flown in for the show).

One thought on “A post about the sexy talk”