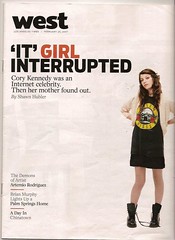 Shawn Hubler’s story about internet darling Cory Kennedy in last Sunday’s LA Times has been getting some buzz all its own, but one detail that I haven’t seen addressed much is the age difference between her and her once boyfriend Mark “The Cobra Snake” Hunter, a relationship her mother, Jinx Kennedy, condoned.

“We were just glad that she was happy,” Jinx says. And when it became apparent that the almost-21-year-old photographer was dating her not-quite-16-year-old daughter, she says, she insisted that the couple spend their time together at the Kennedy-Levin home, where she could watch them.

“I said, ‘Mark, I love you dearly and I’d hate to put you in jail, but I’d do it in a New York minute,'” she remembers. In truth, though, she and her husband felt that Hunter was good for their daughter: “I thought she would be protected because Mark is a great guy.”

(Noted: Kevin Roderick commented that the Santa Monica teen and her mom “come across as less than stable” in the piece.”)

3 thoughts on “About that Cory Kennedy article…”