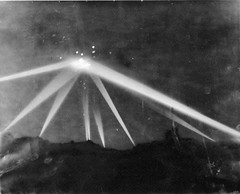 Los Angeles is a magnet for conspiracy theories, celebrity rumors, hoaxes, curses, and anything else that might fall into the catch all term of “urban legend”.

Yesterday, in fact, was the 65th anniversary of “The Battle of Los Angeles”, where a supposed UFO hovered over Santa Monica even after being showered with gunfire from nearby military batteries. The incident made front page headlines in 1942, but with the official US goverment story dismissing the UFO as a “weather balloon”. (watch NBC’s Today Show segment on the legend)

Almost every neighborhood has a local boogeyman, and everyone’s heard the one about Richard Gere having a gerbil extracted from his rectum at Cedar’s Sinai. There’s supposed “gravity hill” at Rose Hills Cemetert in Whittier, and as written about here, an actual “bridge to nowhere” in the San Gabriel Valley.

And I’m not even scratching the surface. In fact, there are so many local legends that next week, Metroblogging Los Angeles will be counting 20 of our personal favorites. To help us assemble a comprehensive list, I wanted to reach out to you, dear reader, for your help.

It could be a curse that extends to the Southland, or a tale that never ventured past the cul-de-sac where you grew up. Maybe its a rumor about a celebrity, or a conspiracy theory about a historical event in LA’s past (or future!). And sometimes, the best legends are ones that are far fetched, but actually true…

15 thoughts on “Question of the Week: What is your favorite Los Angeles legend?”