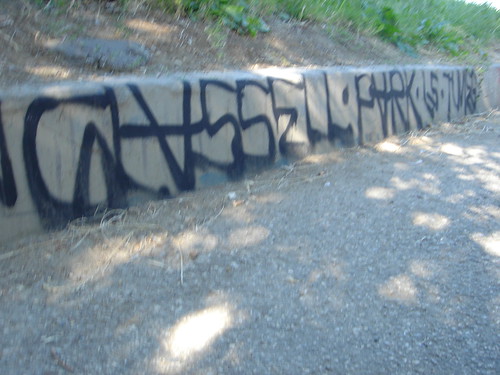 Sounds like the residents of Glassell Park have had it with the gang problem there and are demanding something be done to solve it, well, I mean the residents that aren’t in gangs themselves obviously. Recently a 16 year old girl was shot, by mistake, when a different 16 year old by was shooting at rival gangbangers which sparked the most recent discussions and this meeting:

With fear and anger in the community rising, City Councilman Eric Garcetti called the meeting Monday, drawing a crowd of about 200.

Most of the discussion focused on general fears about gang violence.

The mood was summed up by resident David Mukogawa, who tossed an American flag onto the table in front of Garcetti and other city and police officials. The flag had flown in front of Mukogawa’s house until last week, when it was spray-painted with orange gang signs.

It sounds like the overall theme was residents need to not just sit idle and watch this kind of thing happen. The need to report it when they see, otherwise it just grows. The city and law enforcement is asking the residents to put more trust in them so they can do their jobs, of course this is a difficult tast when the city and law enforcement doesn’t put the same trust in the residents of these communities that clearly are not being protected by the existing systems and policies.

UPDATE: Council President Eric Garcetti just posted about this over on his own blog.

2 thoughts on “Glassell Park Is Sick Of Gangs”